Gurmeet Choudhary has been winning hearts all over with his relentless efforts in helping Covid victims. The pandemic which has seen a rise in the second wave has left several people unwell and struggling for resources. In steps Gurmeet with the launch of his foundation, The Gurmeet Choudhary Foundation. 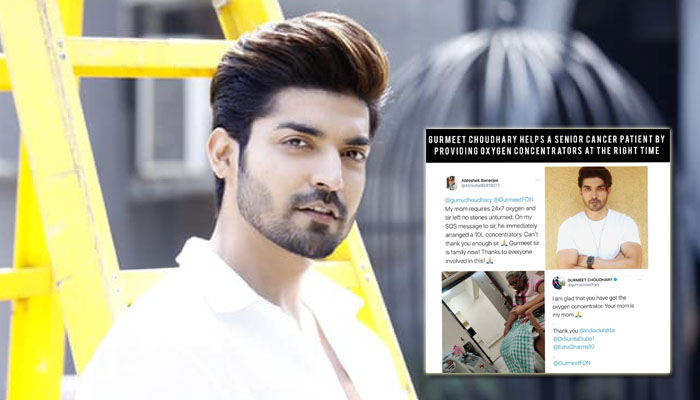 People have been sending the actor requests for help with oxygen cylinders, hospital beds, medicines and rations and Gurmeet has helped them all with his humble nature and innate yearning to help people. Recently, the actor was approached by a man who was struggling to find an oxygen concentrator for his cancer stricken mother.

Gurmeet instantly responded to his tweet and organised a 10L oxygen concentrator for the patient. He and his team left no stone unturned to help the ailing mother and succeeded ! The son expressed his sincere gratitude for Gurmeet’s help via twitter and this left the actor emotional to which he quoted in his tweet, “I am glad you have got the oxygen concentrator. Your mom is my mom.”

This isn’t the first time that Choudhary has helped this young man and his cancer stricken mother. Earlier on, the son had taken to social media to raise funds for his mother’s cancer treatment to which Gurmeet had responded with support and a plea on his social media for the same. The actor’s appeal had helped the son raise the necessary funds for the treatment.

Well, all we can say is that Gurmeet Choudhary with this heroic act has not only won the hearts of the son and his ailing mother but also has created a soft corner in all our hearts. More power to you, Gurmeet!