Gurmeet Choudhary is today hailed as a hero, as a saviour and most importantly as a friend of the people. He has worked relentlessly and tirelessly over the past few months with a plethora of relief effort programmes to combat COVID 19 and its repercussions on society. Not only he has been a star off screen but also his on screen magic has wowed the audience in his super hit music videos like Maaza, Bedardi Se Pyaar Ka and much recent Barasat Ki Dhun. 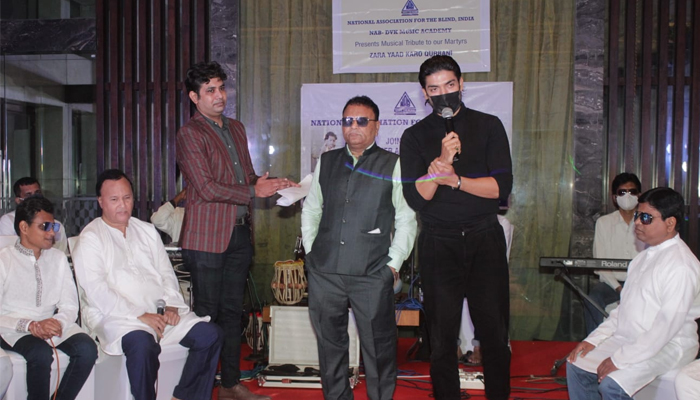 So when the young actor got an invite from the National Association for the Blind known as NAB-India, to be honoured as a special guest for their patriotic musical show, “Zara Yaad Karo Qurbani,” he knew that he had to take time out and be there for such a noble event. The programme that was telecast on YouTube, Facebook and Instagram took place on the eve of India’s Independance Day, Aug 14 at Blue Sea Banquet Hall in Worli, Mumbai.

The pandemic had made it virtually impossible for NAB-India to raise funds and sustain their ongoing CSR effort projects for the visually impaired. The idea behind the musical show was to raise funds for the young students of NAB-India. The funds raised are going to help with the education of these students.

Gurmeet arrived and spent quality time with all the students and was amazed at the talent displayed in the show. Speaking on the same, he affirmed that, “I am delighted to be able to come here and meet these amazing and inspiring young students of NAB-India. When they invited me as their special guest, I knew I had to make it here and also pledge to help them in their educational pursuits. Covid 19 May have put a pause on the world but when you meet them, you can determine that it has not put a pause on their desire to study, to learn and to thrive. Today, they are an inspiration for the entire country and the best way to meet them was on the occasion of Independance Day.”

The national association for the blind also known as NAB-India has been working for the upliftment and welfare of the visually impaired persons in the society since 1952 in the field of education, rehabilitation, employment, advocacy and prevention of blindness through its various departments and 24 state branches.