Bhushan Kumar’s T-Series makes it to the prestigious Times Square billboard in New York,  Westfield Mall in London and in Olympic Blvd, opposite the Grammy Walk of Fame in Los Angeles, as the first Youtube channel to surpass 202 Million Subscribers. Raising the bar higher and shattering all records, India’s largest music label and movie studio, T-Series has crossed the milestone of 202 Million subscribers on YouTube, the first ever channel across the world to do so.  The news has taken the world by storm, quite literally and has made it to coveted billboards across New York, London and Los Angeles with congratulatory messages flowing in from all over. These billboards were put up by the biggest search engine in the world, Google. 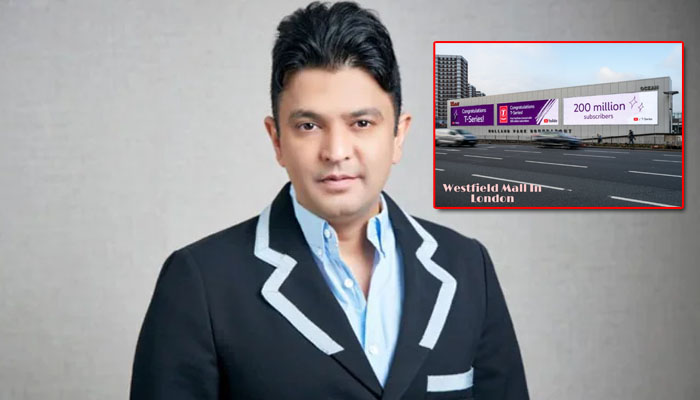 The achievement comes after T-Series witnessed a remarkable growth, churning out not only finest music but also a wide range of films under its banner. T-Series becomes first YouTube channel globally to cross 202 million subscribers. With 29 channels across languages and genres, the total subscriber base for the T-Series network is more than 388 million with over 742 billion views.

Speaking about this phenomenal success Bhushan Kumar, Chairman & Managing Director of T-Series, says, “To be recognised for this feat, and that too across prestigious platforms and billboards like Times Square in New York, London and Los Angeles, is a huge honour for the T-Series family. When you realise that the hard work, strength and grit of so many decades, leads to global recognition and a chance to make your country proud, there is honestly no better feeling. This is indeed a glorious moment for all Indians given that a homegrown Indian channel has become the first channel to cross a colossal 202 Million Subscribers mark on YouTube. I am fortunate to have a passionate team without which this would not have been possible, and I dedicate this success to my digital & music teams. ”

Neeraj Kalyan, President, T-Series adds, “When you see congratulatory milestone messages displayed across some of the most famed billboards in the world like Times Square in NYC, London and LA,  for a label that is truly Made In India, you know it is a moment of great pride for not every T-Series member, but also every Indian. I believe that it’s always team effort that leads a company to achieve its goals. These achievements give me a sense of accomplishment professionally but then there is always hunger and desire to soar higher and take up new challenges.”