Actress Janhvi Kapoor’s upcoming feature film Good Luck Jerry will release on Disney+ Hotstar on July 29. Today she took to her Instagram handle to share the first look of Good Luck Jerry which will make all her fans jump with joy. 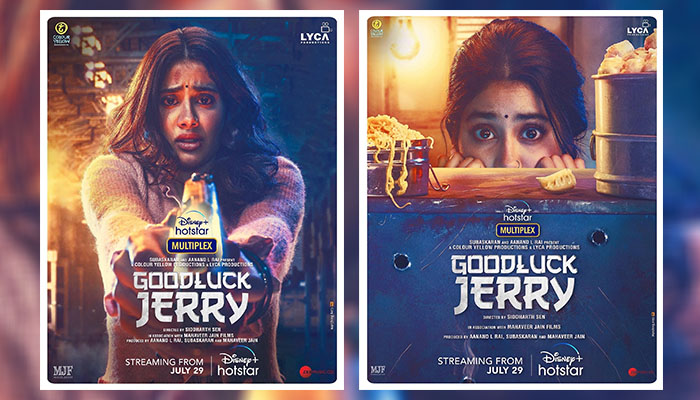 In the first poster, we can see a terrified Janhvi Kapoor aiming with a gun. That bindi on her forehead and her nose ring stand out in her look. In the next poster, she hides behind a table with tiffin boxes kept on it. Sharing these posters, Janhvi wrote, “Nikal Padi hu main ek naye adventure par, GoodLuck nahi bolenge? #GoodLuckJerry streaming from 29th July on @disneyplushotstar.”

Besides this, Janhvi will also be seen in Mili. The film is directed by Mathukutty Xavier, who had directed the original Malayalam film back in 2019. The film also stars Sunny Kaushal and Manoj Pahwa and is backed by Janhvi’s father Boney Kapoor. It marks her first collaboration with her father. Apart from this, she also has Mr and Mrs Mahi with Rajkummar Rao and Bawaal, in which she will co-star with Varun Dhawan.

The actress was last seen in the horror comedy Roohi, with Rajkummar Rao and Varun Sharma. The actress, who made her Bollywood debut with the 2018 film Dhadak, opposite Ishaan Khatter, has featured in films like Netflix’s Ghost Stories and Gunjan Saxena: The Kargil Girl.