One of the most awaited period drama film Kalank is all set to hit the screens this April. Starring Varun Dhawan in a lead role along with Madhuri Dixit, Sonakshi Sinha, Alia Bhatt, Aditya Roy Kapur and Sanjay Dutt. 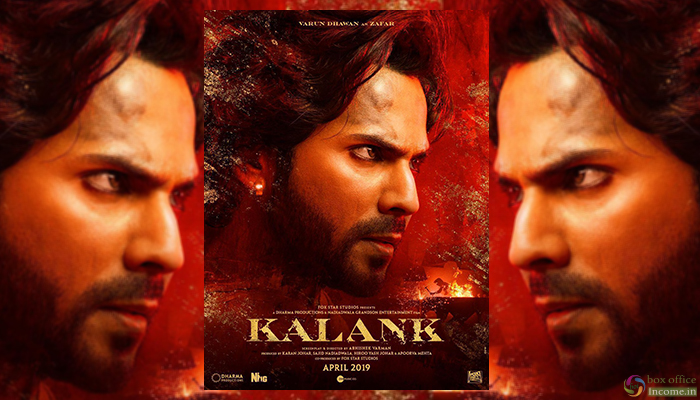 Karan Johar on Wednesday posted a beautiful poster of the film featuring Alia Bhatt and Varun Dhawan. In the caption, he mentioned, “A film that was born in my heart and mind 15 years ago….a film I passionately believe in…the last film my father worked on before he left us….it was his dream to see this film come through….I couldn’t fulfil his dream then….my spirit was broken….but today his wish has found a relationship with celluloid.”

On March 7, Varun Dhawan shared his first look from the film that has created huge buzz among fans. The actor took to Twitter and captioned the picture, “It’s been a hell of a journey playing this gem of a character. So guys, meet Zafar! #MenOfKalank #Kalank”.

As could be seen in the picture, Dhawan will be essaying the role of Zafar, the man who ‘flirts with life and danger’. The actor looks fierce and more than anything else, you could notice the aggression in his eyes and that does increase our anticipation! Now we can’t keep our calm to see the gorgeous Alia Bhatt, Madhuri Dixit and the rest of the cast’s looks.

Alia Bhatt, who stars opposite Varun Dhawan in the film, shared her co-star’s look from the film with the caption, “Fearless in love. Fearless for love. Super happy to present Zafar! #MenOfKalank #Kalank.”

Directed by Abhishek Varman, Kalank is an epic drama set in the 1940s. The film also marks the first collaboration of Fox Star Studios, Dharma Productions and Nadiadwala Grandson Entertainment. The film will hit theaters on April 19.