Yesterday, after releasing the looks of male leads including Sanjay Dutt, Varun Dhawan and Aditya Roy Kapoor, the makers have just released the much-awaited look of Alia Bhatt. The first look showcases Alia Bhatt as Roop in traditional attire and flaunting jewellery with her face veiled with a red saree. 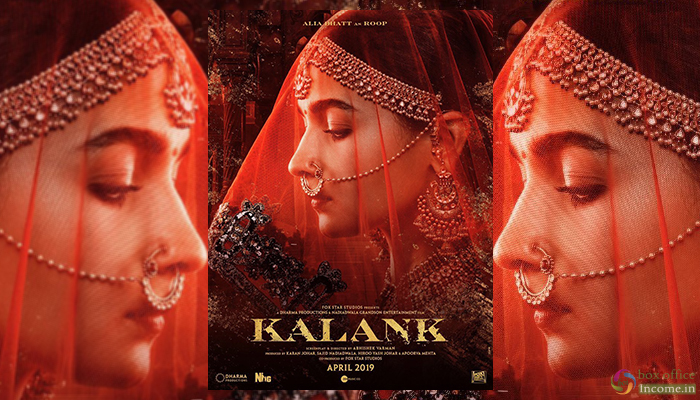 On March 8, Alia Bhatt shared her first look from the film that has created huge buzz among fans. The actress took to Twitter and captioned the picture, “Here she is. Roop ♥️ #WomenOfKalank #Kalank”. Varun Dhawan, who stars opposite Alia Bhatt in the film, shared his co-star’s look from the film with the caption, “Bold. Courageous. Strong-willed. Here’s Roop! #WomenOfKalank #Kalank

Till now we know that Kalank is set in the ’40s and Varun will be playing Zafar, someone who is ready to flirt with life and danger. Aditya, on the other hand, will be seen as a man who defines nobility, Dev Chaudhry and Sanjay will be essaying the role of Balraj Chaudhry, the most powerful voice of the table and he is formidable.

Kalank is directed by 2 States fame Abhishek Varman. Talking about working on the project, Alia recently said at an event, “Kalank is an unbelievable journey. It is an honour to be a part of such a great cast. The film’s director Abhishek Varman is a very dear friend, and we all have put in a lot of hard work for this one.”

Kalank is slated to hit theaters in April this year. It brings back Madhuri Dixit and Sanjay Dutt back on the silver screen after a long time.