Just yesterday, the cast and crew of ‘Bachchan Pandey’ kicked off shooting the film in the New Year in Rajasthan. The film stars Akshay Kumar and Kriti Sanon in the lead roles and for the shoot of the same, everyone had jetted off to Rajasthan. 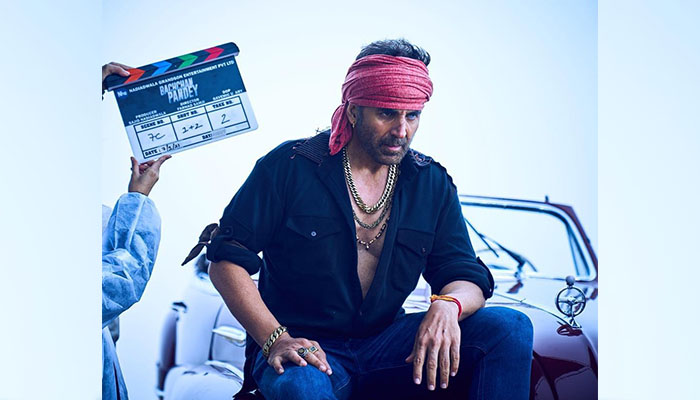 Yesterday, photos of Kriti posing with a clapboard alongside the director Farhad Samji on the set had gone viral on social media. Now, Akshay shared a BTS picture from the sets of Bachchan Pandey and it is unmissable!

Sharing the first look of Akshay Kumar from Bachchan Pandey, the production house (Nadiadwala Grandson Entertainment) wrote, “Here’s to the 10th Collaboration together & a bond decades old! Presenting the Gangster @akshaykumar in & as #BachchanPandey.”

In the photo, Akshay is seen sitting on the hood of a car in a black kurta, jeans and a red scarf wrapped around his forehead. He is also seen sporting several heavy metal chains in his neck to give his look the rowdy gangster vibe. With an intense expression on his face, Akshay seemed all set for his first shot of 2021.