Mohit Suri directorial Ek Villain Returns has a new star cast. The film which is the sequel to 2014 film now stars John Abraham, Arjun Kapoor, Disha Patani and Tara Sutaria in the lead roles. On Thursday, the filmmaker shared a new poster of the film along with the release date. Yes, Ek Villain Returns is slated to release on February 11, 2022, exactly a year from now. 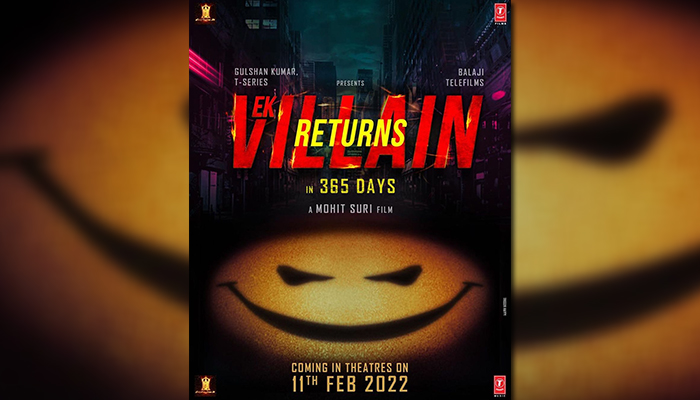 Sharing his excitement, Mohit says, “Ek Villain was my passion project and a labour of love. The kind of love that I still receive for Ek Villain overwhelms me. I am sure with Ek Villain Returns, the love is only going to grow bigger. And while I cannot reveal much about the film, I can assure you that it is going to be a thrilling rollercoaster ride.”

Talking about it, Producer Ekta Kapoor says, “Ek Villain has been one of Balaji’s most loved and commercially successful films and as we gear up to take the franchise forward with a stellar cast, the aim is to create a massive theatrical experience. Seven years later, Ek Villain Returns bigger, better and edgier!

In a similar vein, Producer Bhushan Kumar adds, “Ek Villain was a big success. The film and it’s mesmerising soundtrack has remained etched in the hearts of the audience till date. We hope that we can repeat history with Ek Villain Returns. It is going to bigger and better this time.”

Ek Villain Returns is directed by Mohit Suri and jointly produced by T-Series and Balaji Telefilms.