After the success of Article 15, National Award winner actor Ayushmann Khurrana is back with new comedy entertainer, titled- Dream Girl. Directed by Raaj Shaandilyaa, Dream Girl keeps its promise to entertain you thoroughly. 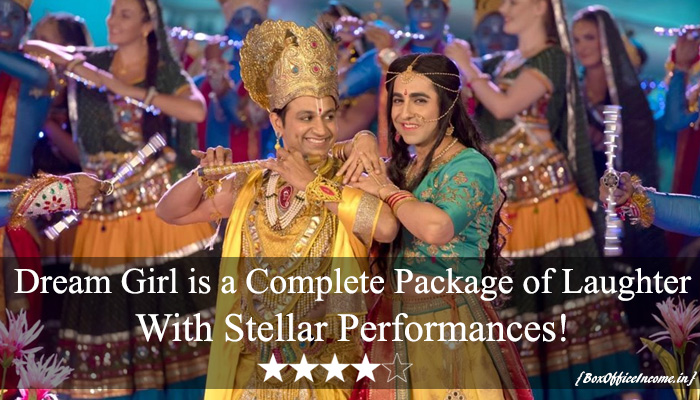 Plot:- Dream Girl begins with a middle-class Gokul boy, Karamvir Singh being roped into the local Ram-Leela and Mahabharata plays as Sita or Draupadi or Radha because he can convincingly pull off a woman’s voice. Karamvir is actively looking for a job to pay off the many loans his dad has taken and lands himself a lucrative offer where he has to impersonate Pooja at a ‘friendship’ call centre. He is so good at his job that he becomes famous among many in no time. What happens next forms the rest of the film.

Performance:- Dream Girl scores full marks for performances. Ayushmann Khurrana once again proves to us why he is a talented force to be reckoned with. Nushrat Bharucha has lesser screen time but makes her presence felt. Annu Kapoor & Vijay Raaz are the two pillars on which the entire film is standing tall.

Direction:- Raaj Shaandilyaa’s direction is superb. Also, he is writer of dialogues further add to the fun and madness. He also has a bit of an experience since he has scripted Kapil Sharma’s show which involves drag acts for laughter.

Music:- The music of the movie is great too. Meet Bros’ music is foot tapping and suits the narrative. Radhe Radhe and Dil Ka Telephone are the best and very well placed. ‘Ik Mulaqaat’ looks a bit forced but is soulful. ‘Gat Gat’ is played in the end credits. ‘Dhagala Lagali’ is missing in the film.