It was a terrifying night in the city of Mumbai when people witnessed a woman as scary as ever, dressed in a burnt red attire, suddenly appearing in front of them. Just imagine, while walking alone on the road, shopping at a store, or going out somewhere, if you come across a ghost walking in front of you. That’s sure to send shivers down your spine. Something similar happened when Choti Maayi, a character from the Amazon Original Film Chhorii was spotted in the city scaring people with her deadly looks. 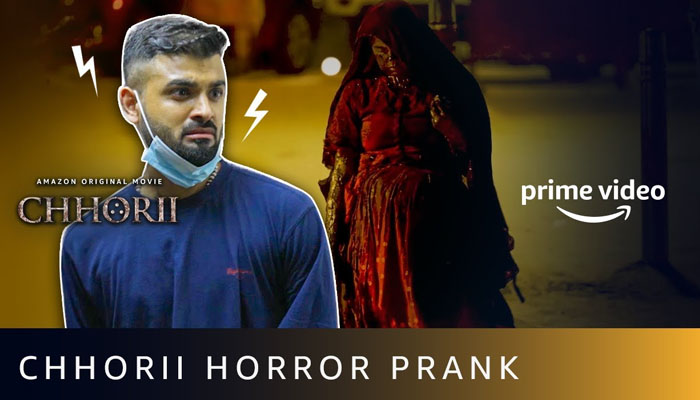 Watching Choti Maayi unleash her terror on the citizens was captured in a recently-released clip by Prime Video. The video, dropped on their social media platforms shows people looking petrified as Choti Maayi appears from nowhere at a department store, jogging track, the beach and even shocks someone as they find her sitting in an auto-rickshaw.

No prizes for guessing that this left many people screaming in fear and running as fast as they could to recover from the shock. With this innovative idea to make people aware of the upcoming horror flick, Amazon Prime Video surely takes the excitement level a notch higher ahead of the launch of the film.

A remake of the Marathi film Lapachhapi, the film features Nushrratt Bharuccha in the lead role, alongside Mita Vashisht, Rajesh Jais, Saurabh Goyal, and Yaanea Bharadwaj. Chhorii is slated to stream on 26th November 2021, on Amazon Prime Video across 240 countries and territories worldwide.