Nitesh Tiwari, the director who gave us one of the finest film in the recent few years (Dangal) is back to wave his magic wand once again. The film stars Sushant Singh Rajput, Shraddha Kapoor and Varun Sharma who are arguably some of the finest actors in Hindi Cinema today. It’s a story of ‘Loser’ friends trying to become winners and learning some important lessons on the way. 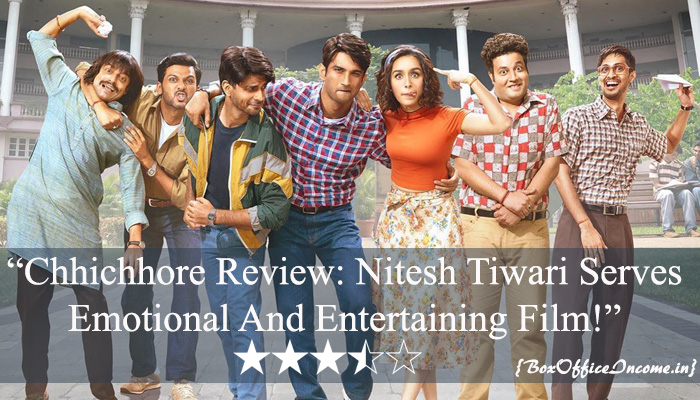 Plot:- The story, beautifully, is divided into two parts – past and present. In the present, Anni (Sushant Singh Rajput) is married to Maya (Shraddha Kapoor), and their son Raghav is hospitalized due to a certain accident. Now, Anni decides to call his gang of losers from the past to narrate the story of his life to his semi-conscious son. What happens next forms the rest of the film.

Performance:- Sushant Singh Rajput brings the much needed star power to the film. His conviction to get into the skin of the character (Annirudh aka Anni) is evident right from the first scene. Shraddha Kapoor looks pretty & acts with equal vibrancy. Varun Sharma handles the comical portions of the film very well. Probably the best after Choocha for him, but definitely the best when it comes to the character sketch.

Tahir Raj Bhasin looks dashing and performs very well. Naveen Polishetty has a good screen presence and is lovely as the guy with the acidic tongue. Tushar Pandey is fine for the character he plays and adds humor to the proceedings.

Direction:- Nitesh Tiwari who gave us the extremely well-written and well-executed Dangal, once again presents a heartwarming story. Along with co-writers Piyush Gupta and Nikhil Mehrotra, Tiwari makes Chhichhore an interesting watch from start to finish.

Music:- Pritam’s music is good especially in songs like ‘Fikar Not’, ‘Control’. ‘Fikar Not’ is the best of the lot as it also reflects the film’s message. ‘Control’ comes next as the situation during which it’s played is funny. ‘Woh Din’ and ‘Khairyat’ fail to make a mark while ‘Kal Ki Hi Baat Hai’ is played just for a few seconds.