Marvel Studios’ presentation the newly released Hollywood biggie Captain Marvel is reigning the Indian box office despite having several new & existing Hindi offerings in parallel. The American superhero got succeed to impress everyone and gained a strong word of mouth. 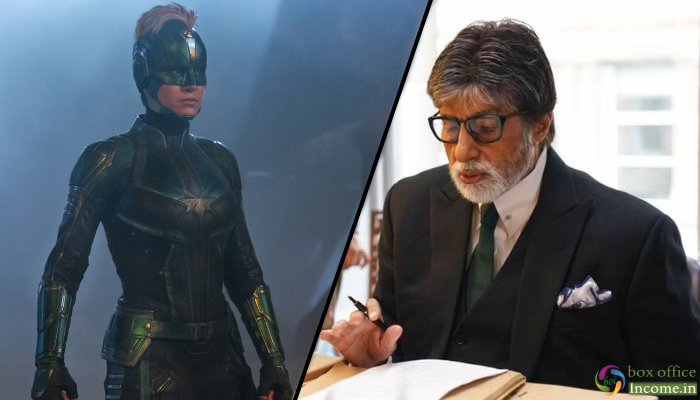 Directed by Anna Boden and Ryan Fleck, the twenty-first film in the Marvel Cinematic Universe, Captain Marvel has received rave reviews from the critics as well as the audience for its solid plot and edge-of-the-seat thrilling actions & stunts. As a result, it remained the first choice of all in this week so far.

American movie Captain Marvel received a good response from the Indian audience in the weekend and registered the business of 40.71 crores (Fri 13.01cr, Sat 14.10cr, Sun 13.60cr). On weekdays, it got dropped by a usual rate and minted 4.87 crores on Monday, 4.13 crores on Tuesday & 3.55 crores on Wednesday. After 5 days total collection has become 53.26 crores nett.

On the other hand, Sujoy Ghosh’s directorial mystery crime thriller Badla has also received positive reviews from critics as well as audience but still heading decently at box office due to clutter. In the opening weekend, it did the business of 23.20 crores that included 5.04 crores of Friday, 8.55 crores of Saturday and 9.61 crores of Sunday.

In weekdays, Amitabh Bachchan and Taapsee Pannu starrer witnessed usual drop in footfalls but still heading almost steadily due to positive word of mouth. On Monday, it raked the business of 3.75 crores, while 3.85 crores on Tuesday. Then on Wednesday, Badla garnered 3.55 crore and raised it’s 6 days domestic total to 34.35 crores.