Bhushan Kumar’s T-Series has always been at the forefront of producing devotional songs for the audience. With exceptional songs and collaborations with notable singers for the same, they have time and again proved that the devotional music space is certainly ruled by the production house. 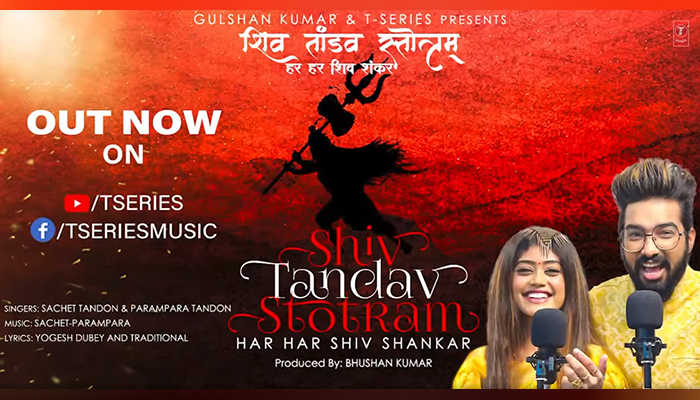 Sachet and Parampara Tandon received love for their version of Shiv Tandav Stotram on their social media handles. As a return gift to their fans for their appreciation, the duo with T-Series now releases the full version of the devotional song – Shiv Tandav Stotram. The lyrical video composed & sung by Sachet-Parampara with additional lyrics by Yogesh Dubey will certainly give the audience a magical experience with its tunes and vocals.

Bhushan Kumar says, “We have always believed in making music which appeals to the entire audience. Our devotional songs have got great response in the past and with Sachet and Parampara in Shiv Tandav Stotram, the response is going to be phenomenal. This particular song will resonate with everybody all thanks to the team and their hard work.”

Sachet & Parampara say, “It has and always will be a great experience to work with Bhushanji and T-Series. Over the past few weeks, our songs on YouTube and Instagram have got many praises from the audience. Their crazy response for our version of Shiv Tandav and Har Har Shiv Shankar ( an original composition), already became blockbuster even before the release of full version. We got Innumerable messages from our listeners requesting for a longer version as our voices, they felt were giving them goosebumps and they were able to get that divine emotional connection with almighty via our version.”

Shiv Tandav Stotram by Bhushan Kumar’s T-Series and Sachet and Parampara Tandon is out now.