Bhushan Kumar, who heads the biggest music label in the country, has come up with ways of entertaining the audience who are currently locked inside their homes. Right from releasing new videos to ‘The Care Concert’, Kumar is a doing his bit for each and all. 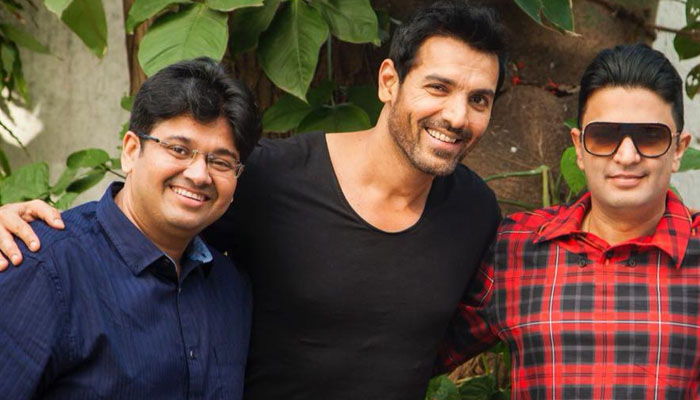 His next is Mera Bharat Mahan, a simple yet impactful poem, that he released on T-Series YouTube channel by Milap Milan Zaveri featuring John Abraham who recites the poem thanking the brave hearts who are protecting us all and shares a message of positivity and happiness. Bhushan Kumar, who is close to both Milap and John, knew the song impacted him and needed to reach everyone.

The two and a half minute video is a rising testament to the valiant fight that the countrymen together have been putting up against the invisible virus. Saluting the unity and the efforts of the Government, the doctors, nurses, soldiers and policemen at large. John has been a strong patiot at heart and it was he who wanted to do this for Milap.

The video has been shot completely at home and the team has followed all Government guidelines while readying it for the viewers. Mera Bharat Mahan has already clocked around 700k views on YouTube. The director Milap tells us, “I wrote the poem “Mera Bharat Mahaan” and conceptualised the video because I felt the entire country and the world needs a message of positivity, strength and hope. We are all sitting at home and doing our duty. But the warriors like doctors, police, workers of essential services are out there on the battlefield for us.”

“I wanted to honour them and my country which is doing such a phenomenal job in battling this virus. I was thrilled when John loved the poem and agreed to be part of it. While we wait to begin work on Satyameva Jayate 2, this was a wonderful way to do something with him again. He is my hero and has always supported me. John is a symbol of strength, goodness and patriotism. Grateful to him for being part of this endeavour to instill hope and pride in people.” he adds.

Bhushan Kumar, head honcho of T-Series, shares, “The country is fighting an invisible war at this point and this is just an ode to the indomitable human spirit that exists among Indians. It’s this spirit that has United us against this common enemy and with the help of the Government’s unflinching support, I’m sure we will soon emerge victorious and Corona free.”

“Mera Bharat Mahan is a rising testament and our way of saluting all those police officers, doctors, nurses, soldiers and every other Indian citizen who are working relentlessly to keep us safe. I want to take this opportunity to thank everyone in the country who are following the guidelines and are working in unity to fight Corona.” he adds.

Mera Bharat Mahan, a poem of hope, courage, gratitude for India and the world, is witten and conceptualised by Milap Milan Zaveri. Music by Lijo George and released on T-Series’ YouTube channel.