Ajay Devgn who is gearing up for the release of his upcoming film Runway 34 has announced the release date of his next titled Bholaa. The actor, on Tuesday evening, took to his Twitter handle to announce that the film will be released in theatres on March 30, 2023. The film is the official remake of the Tamil film Kaithi and also stars Tabu. 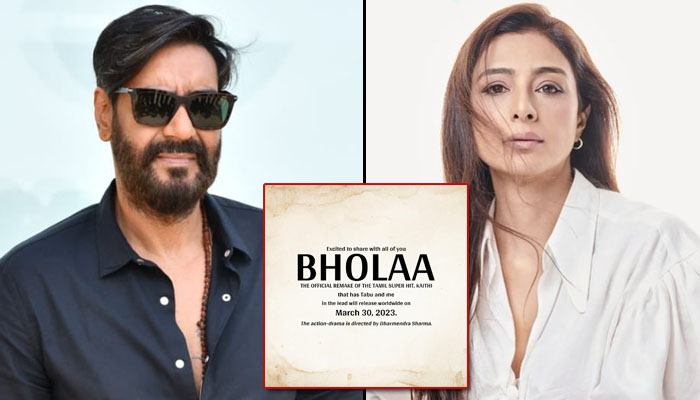 The original version had Karthi Sivakumar (Karthi) playing the lead and it was directed by Lokesh Kanagaraj while the Hindi remake shall be helmed by Dharmendra Sharma. Interestingly, Sharma has been an editor for many of Ajay’s films like, Tanhaji: The Unsung Warrior, Shivaay, Atithi Tum Kab Jaoge amidst many others.

The film which was initially supposed to be released in early 2021 was delayed by the pandemic. The film eventually went on floors in January this year. The remake will be produced by SR Prakashbabu and Reliance Entertainment.

The original film revolves around a prisoner, played by Karthi, who comes to the aid of the police when they are attacked by a gang of smugglers. In exchange, the police help him reunite with his daughter. The film was headlined by Karthi alongside Narain and Dheena.

Meanwhile, Ajay is currently busy promoting his upcoming film ‘Runway 34’. The film also stars Rakul Preet Singh and Amitabh Bachchan. ‘Runway 34’ is inspired by a true incident of the Jet Airways Doha to Kochi flight that had a narrow escape in August 2015, after facing difficulties to land at the Cochin International Airport due to bad weather and unclear visibility.