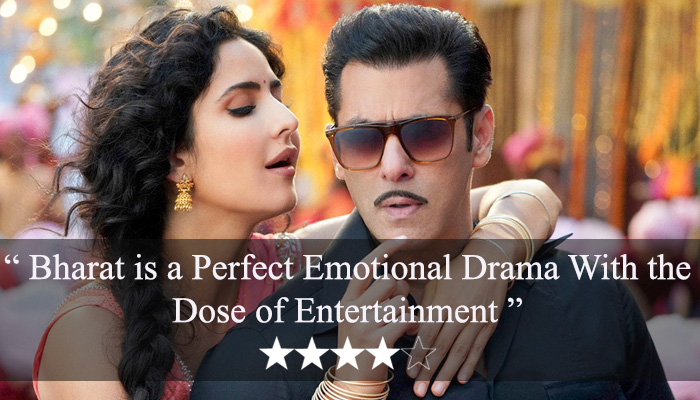 Salman Khan is back on the big screen this Eid with the Ali Abbas Zafar directed Bharat. A day before of the release of Salman Khan-Katrina Kaif-starrer Bharat on Eid, the makers held a special screening in Mumbai. Many Bollywood stars attended it and came away praising the effort, showering it with their love.

An official adaptation of South Korean drama Ode to my Father (2014), Bharat focuses on the personal and professional choices of its righteous hero, set against the social backdrop of its time.

Plot:- Bharat is about the journey of a man and a nation together. The story begins in 1947 in Mirpur village near Lahore. Bharat (Salman Khan) is a kid and his father Gautam Kumar (Jackie Shroff) dotes on him. This is the time of Partition and Bharat and his family are compelled to leave for India. He washes cars, polishes shoes, joins the circus, goes to the middle east for a job, becomes a Merchant Navy officer with only one thought in mind (he has to keep his family together). In the meantime, he befriends Vilayati (Sunil Grover), falls in love with Radha (Disha Patani) and MadamSir Kumud (Katrina Kaif). What happens next forms the rest of the film.

Performance:- Talking about the performance, Bharat stand on top. Salman Khan as Bharat is fantastic in each fame, Katrina Kaif as Kumud Raina is very good. She is so glamorous. Tabu (Meher) just has one scene, which is good.

Jackie Shroff’s screen time is very limited but he has a crucial part and he makes his presence felt. Disha Patani is sizzling and has a fine screen presence. Nora Fatehi (Sussan) looks quite hot but is wasted. While, Aasif Sheikh (Mehek’s husband) stands out with his characterization and humour.

Direction:- Ali Abbas Zafar’s direction is topnotch. This film is in a different zone but Ali handles it all like a pro.

Music:- Music of Bharat is good but could have been better. It has seven songs composed by Vishal-Shekhar. Slow Motion’ is the top song of the lot followed by ‘Chashni’. ‘Aithey Aa’ is well choreographed. ‘Zinda’ is exhilarating. ‘Tupreya’, ‘Aaya Na Tu’ and ‘Thap Thap’ are okay.

Final Words:- On the whole, Salman Khan and Katrina Kaif’s latest offering is a perfect Emotional Drama With the Dose of Entertainment!