Director Nikkhil Advani’s Batla House has enjoyed a great extended opening week at the ticket windows. Despite facing stiff competition from Akshay Kumar’s Mission Mangal, the masala entertainer has managed to attend to number of footfalls specifically in the single screens. 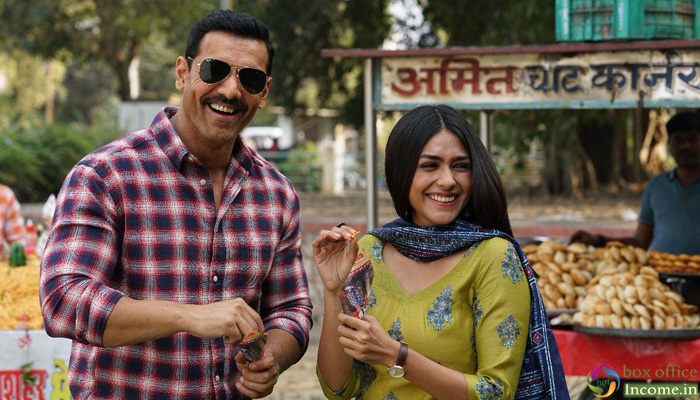 Based on the infamous 2008 Batla House encounter case, the Nikhil Advani directorial has received positive reviews from critics. In the film, John Abraham plays the role of Sanjay Kumar, inspired by real-life hero DCP Sanjeev Kumar Yadav, a recipient of Gallantry Award.

T-Series, Emmay Entertainment, John Abraham Entertainment and Bake My Cake Films’s presentation was released on Independence Day and due to a national holiday, it opened on an amazing note. By remaining almost steady throughout the extended opening weekend, the film did the business of 47.99 crores with 15.55 crores on Thursday, 8.84 crores on Friday, 9.18 crores on Saturday, and 10.90 crores on Sunday.

Then on weekdays, Batla House managed to collect the amount of 5.05 crores on Monday, 4.78 crores on Tuesday, 4.24 crores on 2nd Wednesday, and 3.78 crores on 2nd Thursday. After 8-days extended first week, its total collection was recorded at 65.84 crores nett domestically.

Now John-Mrunal has entered in the second weekend along with Mission Mangal in the opposite. On 2nd Friday, Batla House minted the amount of 4.15 crores due to partially holiday of Janmashtami and raised its total domestic collection after 10 days to 69.99 crores nett.