Last week released Amitabh Bachchan and Taapsee Pannu starrer Badla showed overall good performance in the opening week after taking a decent opening. Now the movie is running in second weekend and still has good hold over the audience despite having several new Hindi offerings in opposite. 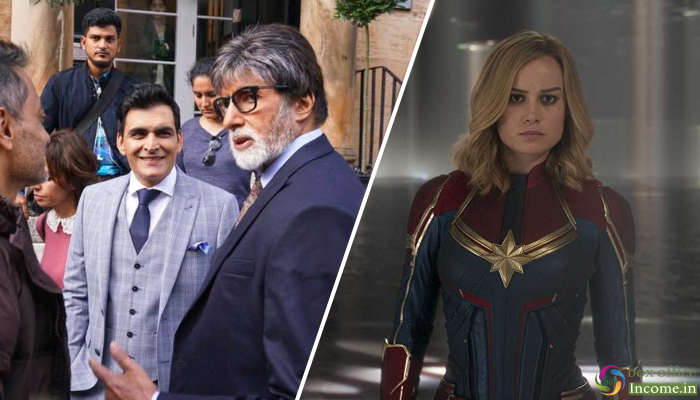 Directed by Sujoy Ghosh, this mystery crime thriller started on a decent note than expected due to clash with English movie Captain Marvel. Because of positive word of mouth, it picked up very well over the weekend and remained steady through out the opening week.

Badla did the business of total 38 crores in the first week, that included 23.20 crores of weekend and 9.61 crores of weekdays. Now in the second weekend as well, the movie is getting good response and minted the amount of 4.05 crore on 2nd Friday which is higher than previous day.

On the next day i.e. 2nd Saturday, Badla once again witnessed superb growth and garnered the business of 6.70 crore. With this, total collection of the movie after 9 days of release, has become 48.75 crores at domestic box office. On Sunday as well, it seems to show more jump in business graph.

On the other hand, adjacent release Captain Marvel had higher initial buzz and got far better response than the opposite one in the first week despite mixed reviews. In the opening week, it did the business of 56.41 crores that included 40.71 crores of weekend and 15.70 crores of weekdays.

Now in the second week, Captain Marvel has also been released in Hindi language now and still heading smoothly. On 2nd Friday, it minted the amount of 3.15 crore. On the next day i.e 2nd Saturday, Anna Boden and Ryan Fleck’s directorial’s bagged 5.30 crores and raised it’s 9 days business to 64.86 crores.