Amitabh Bachchan and Taapsee Pannu starrer much-anticipated mystery crime thriller Badla took an average start at the box office but picked up very well successfully over the weekend. Despite having Hollywood movie Captain Marvel in its parallel, it is heading steadily on weekdays as well. 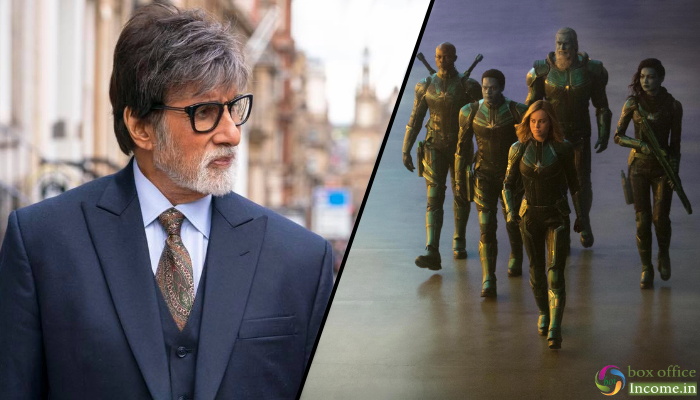 Directed by Sujoy Ghosh, Badla has got succeed to impress many with its solid content and gained positive word of mouth. In the opening weekend, it did the business of 23.20 crores, that included 5.04 crores on Friday, 8.55 crores on Saturday, and 9.61 crores on Sunday.

Now it is running on weekdays and still has a strong hold over the audience across India. On Monday, Red Chillies Entertainment and Azure Entertainment’ presentation remained strong and minted the amount of 3.75 crores. Then on Tuesday, with a little jump, Badla collected 3.85 crores and raised 5 days total collection to 30.80 crores.

On the other hand, the highly-buzzed American superhero Captain Marvel has also got positive feedback from the Indian audience and recorded but recorded a lower jump over the weekend than expected. It bagged the business of 40.71 crores in first 3-days, with 13.01 crores on Friday, 14.10 crores on Saturday & 13.60 crores on Sunday.

On weekdays, Marvel Studios’ presentation has witnessed a usual drop and minted 4.87 crores on Monday, while on Tuesday with a further decline, Captain Marvel scored 4.13 crores and raised 5 days total collection to 49.71 crores nett from 1900 screens.