After successful collaborations with Junglee Pictures on Bareilly Ki Barfi and National Award-winning Badhaai Ho, Ayushmann Khurrana is collaborating with the banner again. He will be starring in and as Doctor G in their next production. The campus comedy-drama will be helmed by debutante director Anubhuti Kashyap. 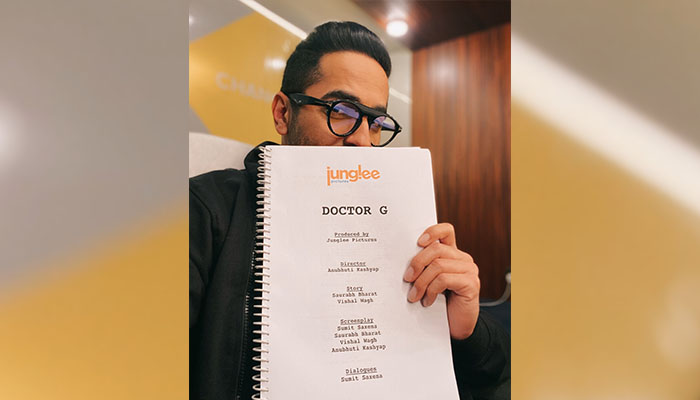 Ayushmann says “Doctor G is a script that I fell in love with instantly because it is super fresh. It is an extremely unique and innovative concept that will make you laugh and also make you ponder. I’m excited to don the doctor’s coat for the first time in my career and also deliver a message in the process that will hopefully speak directly to your hearts.”

To be directed by Anubhuti Kashyap, this film is a campus comedy-drama where the main protagonist will be seen playing a doctor. It’s been a while since that has happened in Hindi films and with Ayushmann playing ‘Doctor G’, the wait is definitely going to be worth Anubhuti Kashyap, who is all set to make her feature debut with this film shares, “I am stepping into my filmmaking journey with all my passion and this project has me thrilled to be on sets. I am looking forward to working with Junglee Pictures and the ever so versatile & talented Ayushmann. This film is definitely exciting because it appeals to both the younger & the family audiences equally.”

Amrita Pandey, CEO of Junglee Pictures, adds, “We are thrilled to partner with Anubhuti on Doctor G as her first feature film. The creative development team at Junglee along with the writers of the film Sumit, Vishal, Saurabh, and Anubhuti have developed this high concept and the superbly entertaining script that we can’t wait to bring to life. Ayushmann will elevate the experience even more with this 3rd outing with Junglee.”

Ayushmann excited about reuniting with Junglee adds, “Junglee’s vision towards storytelling excites me. Their focus has always been towards high concept films which match with my thinking as an artist. We have had two very successful outings before and I’m hoping Doctor G will be a hat-trick of hits for us. Anubhuti’s vision for the film is mind-blowing and I’m sure it will be super fun to creatively collaborate with her.”

Ayushmann’s previous collaborations with Junglee Pictures has owned the Box Office collections. Successful as ever, Badhaai Ho released in 2018 and won two National Awards one of them for the Best Popular Film Providing Wholesome Entertainment. Bareilly Ki Barfi that hit the screens in 2017 was a film appreciated widely by the audiences and the critics at the same time.

The movie ‘Doctor G’ featuring Ayushmann Khurrana as the lead protagonist is co-written and directed by Anubhuti Kashyap. She has directed the dark comedy mini-series Afsos (Amazon Prime) and acclaimed short film, ‘Moi Marjaani’. The film is written by Sumit Saxena, Vishal Wagh, and Saurabh Bharat, who interestingly is a doctor-turned-writer and has drawn inspiration from his medical college life experiences. Saxena, who has written films like ‘Pyaar Ka Punchnama’ and Karan Johar’s Lust Stories, has also penned the dialogues of this film.