After receiving encouraging reviews for her performance in the suspense thriller ‘Koi Jaane Na’, Amyra Dastur recently set a strong example on a popular social media platform by shutting down a disrespectful troll. 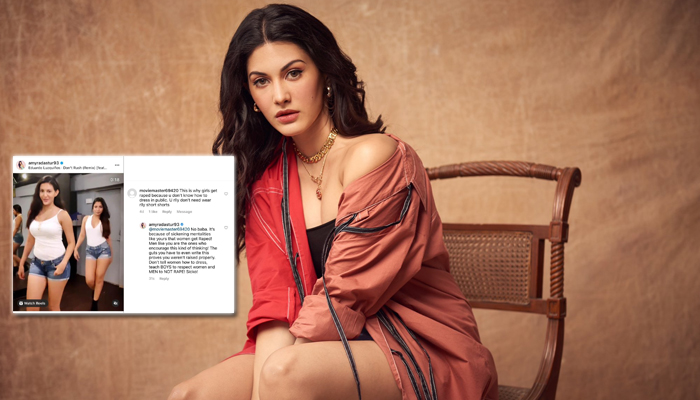 Amyra participated in the ‘Don’t Rush’ Instagram reel challenge, which was been positively received by her fans and have over 5million views. Unfortunately, like most stars, Amyra too faced insensitive comments from a troll, who not only condemned her outfit but also resorted to some shocking rape remarks.

In a hate message, the troll accused women of dressing inappropriately and hence being victimized to rape. The young star was quick to hit back at the troll as she responded “It’s because of sickening mentalities like yours that women get raped.” Amyra also went on to school the troll and passed on an empowering message adding, “Don’t teach women how to dress, teach BOYS to respect women and MEN to NOT RAPE”.

She started her career at the age of 16 as an Indian model and made a name for herself by endorsing big brands such as Clean and Clear, Airtel, Garnier and Micromax. She starred in Vikram Bhatt’s sci-fi thriller Mr. X alongside Emraan Hashmi. She also made her Tamil debut with Anegan alongside Dhanush.