Akshay Kumar made his music video debut in 2019 with the song titled ‘Filhaal’ also featuring Kriti Sanon’s younger sister Nupur Sanon. After the success of the song, the makers of the song started working on ‘Filhaal 2’. Today, Akshay Kumar unveiled the poster of the song and announced that the teaser will be out on June 30. 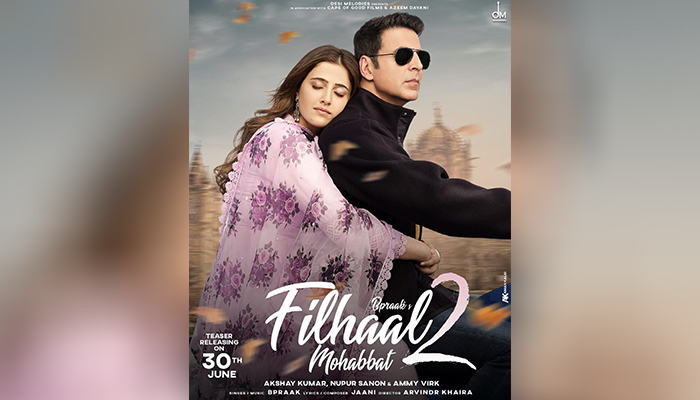 In the first look poster of the song, Akshay and Nupur are seen on a bike as Nupur holds on tightly to Akshay. Akshay looks dapper dressed in all black while Nupur looks gorgeous in a lavender coloured dress.

“And the pain continues… If Filhall touched your heart, Filhaal 2 – Mohabbat will touch your soul Dizzy symbol Stay tuned, teaser releasing on 30th June!,” Akshay shared along with the poster.

For the uninformed, Filhaal video song showcased Akshay Kumar and Nupur’s character in love with each other with a tragic end. Directed by Arvindr Khaira, the song written by Jaani and released in November, quickly became one of the most successful singles of the year.

While, the song is penned and composed by Jaani and sung by B Praak. The song also features Ammy Virk.