Actor-producer Ajay Devgn and director Om Raut started the year 2020 by releasing their much-anticipated movie Tanhaji: The Unsung Warrior. The movie that also starred Saif Ali Khan and Kajol in lead roles became one of the highest-grossing films of 2020. While many filmmakers came forward with their best works in the form of movies and web-shows, this dream project was celebrated by masses as it marked Devgn’s 100th film. 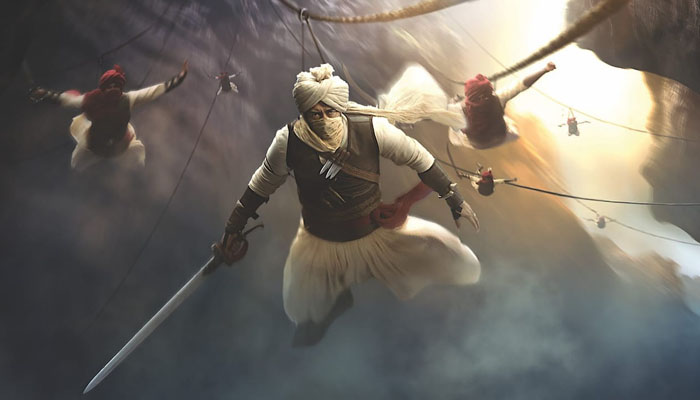 The movie took us through the mesmerising story of Subhedar Tanhaji Malusare, a trusted soldier of Chhatrapati Shivaji Maharaj, who sacrificed his life in the Battle of Sinhagad. Not only did the movie earn more than 270 crores in the six weeks that it was being screened, but it was later re-released in October 2020 when theatres reopened for the audience.

The movie was quick to climb the box-office charts due to its exceptional cinematic experience. With the gripping storyline, the remarkable VFX that brought to life the difficult stunts by the cast and Ajay Devgn’s collaboration with actor Saif Ali Khan and wife Kajol on-screen after a long time created an excitement amongst the audience. Watching the story of courage and valour, which marked the directorial debut of Om Raut in Bollywood, especially in 3D, on the big screen turned out to be an unforgettable experience for everyone.

After going through a four-year process to create the masterpiece, Tanhaji: The Unsung Warrior has created its mark in the history of Indian cinema. It shed light on why the Indian audience loved watching stories of valiant heroes from our history. It gives us a medium to learn more about the situations the courageous leaders had to face to fight against injustice. The memorable characters, the dialogues, down-to-earth costumes, the songs and the heroism, drama, emotions showcased by the actors, resonated with us as an audience.

With the movie, the director-actor duo Om Raut and Ajay Devgn showcased that no matter what, biopics of our forgotten heroes like Tanhaji Malusare will always be cherished by the fans because somehow we see the snippets of ourselves in the characters portrayed on the screen.

Today as Tanhaji: The Unsung Warrior completes a year, we are eagerly waiting for Ajay Devgn to announce more details about the promised unsung warriors franchise. He will be capturing the stories of the forgotten heroes who laid their lives to protect the people they loved and cherished.