Adipurush, one of the most anticipated Indian films of 2023, whose first teaser was released on Sunday, unites the talents of Prabhas (of the Baahubali franchise) and Om Raut, who directed the Ajay Devgn-starrer Tanhaji: The Unsung Warrior, the biggest Indian box office hit of 2020. 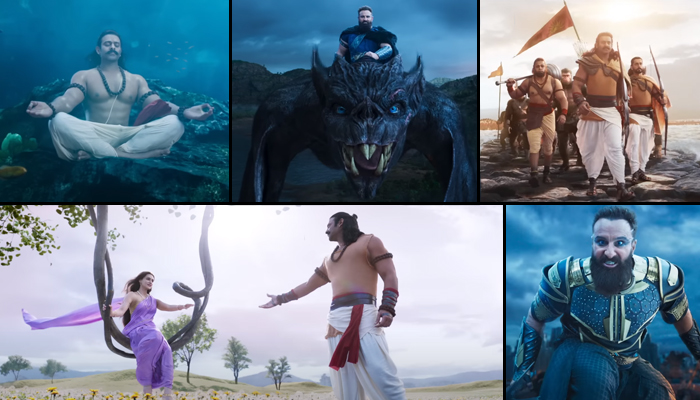 Adipurush is Raut’s take on the ‘Ramayana’ by Valmiki. The film is set 7,000 years ago and in the film, Prabhas’ character is not called Lord Ram, he is Raghav, which is another name for Ram. Sita, played by Kriti Sanon, is called Janaki (as in King Janaka’s daughter), while Saif Ali Khan’s Ravana is Lankesh (lord of Lanka), which are also derivatives of their ‘Ramayana’ names, notes ‘Variety’.

The 1 minutes and 47 seconds teaser opens with a wide glimpse at a sea where Lord Ram (Prabhas) is meditating underwater. He uses his bow and arrow in order to kill the demons. The timeless story of good vs evil, justice vs injustice. We get a glimpse of Saif Ali Khan as Ravana and his ten heads. Kriti Sanon makes an appearance as Sita whereas Sunny Singh plays Lord Lakshman. The teaser goes back and forth between Vanar sena, Lord Ram heading to fight against Ravana who has captured Sita. The scenes from the sea, battles and more add impact. The Hindi teaser has Sharad Kelkar’s voice-over.

Adipurush literally means ‘first man’, but here the interpretation is that of ‘best man’.

Produced by T-Series Films and Retrophiles, the film features Prabhas as Lord Ram, while Kriti plays the role of Janaki (Sita). It also stars Saif Ali Khan as Lankesh and Sunny Singh as Lakshman. Adipurush is a visual extravaganza slated to release on January 12, 2023, in IMAX and 3D. It will release in Hindi, Tamil, Telugu, Kannada and Malayalam in theatres.