Actor Divyenndu, better known as Munna Bhaiya for one of his best known characters till date, has the funniest take on the urban dictionary trend on social media. 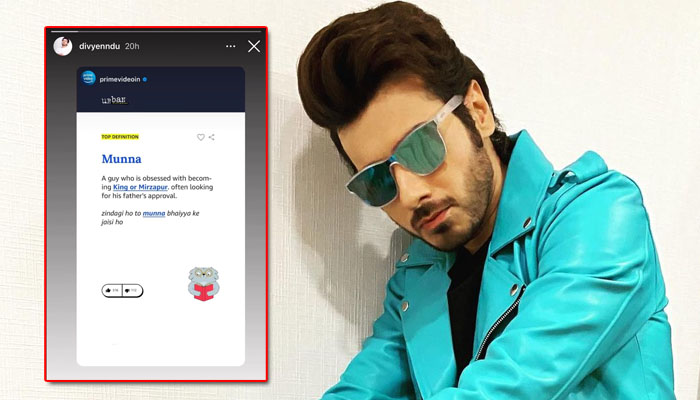 Taking to his instagram, the actor took to his social media following the ‘urban dictionary’ trend where one shares a screenshot of what their name means on the website. The versatile actor, Divyenndu reposted the screenshot shared by Prime Video of their search of ‘Munna’.

The meaning of Munna read, “A guy who is obsessed with becoming King of Mirzapur. Often looking for his father’s approval. zindagi ho to munna bhaiyya ke jaisi ho”

Munna Bhaiya is clearly one of the most loved Indian characters ever to have been made and Divyenndu’s portrayal has etched it into everyone’s memories forever.

From his guy next door role in Pyaar Ka Punchnama to the small town goon in Mirzapur, Divyenndu has always won the audience over with his versatility. The actor is rumored to have signed up for various projects in the last year, most of which are expected to be announced soon.