It’s Official! Actor Vidyut Jammwal and ace fashion designer Nandita Mahtani are engaged. On Monday, Vidyut took to Instagram and made his relationship with Nandita official, revealing that the two got engaged on September 1. The couple visited the Taj Mahal in Agra to celebrate the special occasion a few days ago. 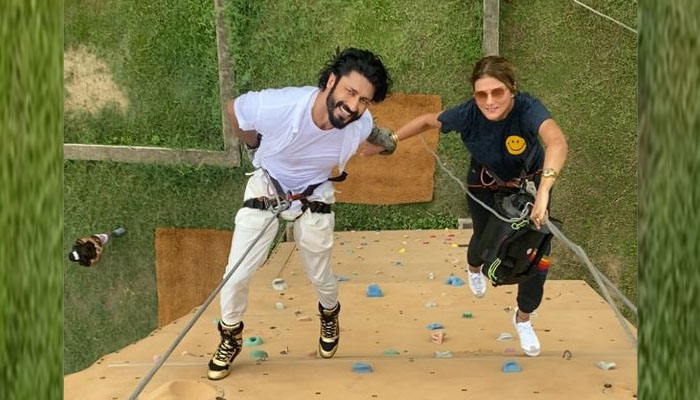 He also posted two pictures. In the first image, the two can be seen climbing a wall and in the second one, they can be seen posing in front of the Taj Mahal. Reportedly, Vidyut popped the question to Nandita while rappelling down a wall in an army camp.

“Did it the COMMANDO way. 01/09/21,” Vidyut, who is best known for his role in ‘Commando’ franchise captioned the post.

Nandita, too, shared the news with her Instagram followers. “Couldn’t keep him hanging any longer…said yes!! 1-9-21,” she wrote while flaunting her huge rock in one of the pictures.

Vidyut and Nandita were in Agra on September 1, which was when he popped the question. Their pictures from the visit were shared by their fan pages on Instagram and reports had emerged that they had gotten engaged.

Last year, Vidyut had given hints about dating someone while talking to actor and fighter Michael Jai White, who appeared on his show X-Rayed as a guest. “I’ve just started seeing this girl. By the way, you (Michael) are the first person I am saying it to. I have just started seeing somebody. I really like this girl and before you get to know through other sources, I think Michael has inspired me to say it,” he had said.