Actor Kartikeya Gummakond is celebrating his 29th birthday today and on this special occasion, makers of his upcoming movie Valimai unveiled a new poster featuring Kartikeya. In the poster, Kartikeya can be seen holding a phone and a bottle in his hand. Valimai is a cop drama which is directed by H Vinoth and produced by Boney Kapoor under the banner of Bayview Projects Ltd. 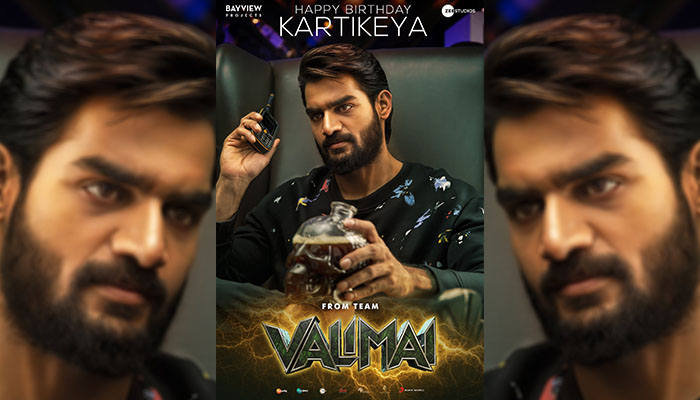 As per reports, the shooting of Valimai was recently wrapped up with the end of the Russia schedule. In Russia, the makers shot some power-packed stunt sequences with a huge crew. The movie which is currently in the post-production stage may release this year or early next year.

For the unversed, Ajith had collaborated earlier with director H Vinoth and producer Boney Kapoor for Nerkonda Paarvai in 2019. The trio has again reunited for Valimai, which is a cop drama. Ajith will be seen as a suave cop once again after Yennai Arindhaal. On the other hand, Kartikeya Gummakonda is playing the role of an antagonist.

Speaking of the movie, aside from Ajith and Kartikeya, the film features Huma Qureshi, Yogi Babu, and Sumitra in key roles. While the cinematography was handled by Nirav Shah and the film is being edited by Vijay Velukutty.

Talking about the birthday boy, the actor is best known for his role in the romantic action film RX100 which is being remade in Hindi as well. He later appeared in films such as Hippi, Guna 369, Nani’s Gang Leader and 90ML. The actor was in the news last month when he got engaged to his girlfriend Lohitha Reddy.