The shooting for Nagarjuna and Sonal Chauhan starrer ‘The Ghost’ has come to an end. The actress took to her social media and shared the update about the film’s wrap. The makers uploaded a video in which the whole team is seen announcing the film’s wrap in style. 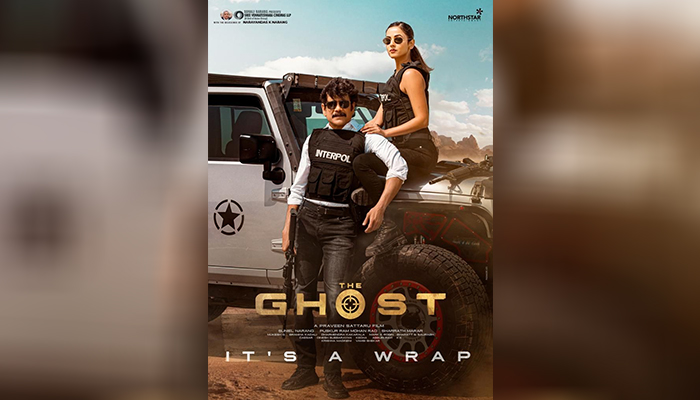 Nagarjuna is seen firing a gun in the clip. The highly anticipated film will arrive in theatres on October 5. Praveen Sattaru’s directorial also stars Sonal Chauhan in the lead role. ‘The Ghost’ is said to be mounted on a large canvas under Sree Venkateshwara Cinemas LLP and Northstar Entertainment Banners.

The makes also released a poster in which Nagarjuna can be seen leaning on a massive Jeep, whereas Sonal Chauhan sits on the vehicle with an intense yet utmost grace. Both the Interpol officers look ultra-stylish and they seem to be gearing up for a big action as they carry machine guns.

A month ago, a less-than-a-minute long teaser of Nagarjuna’s The Ghost was unveiled. In the teaser, Nagarjuna was seen wielding two katana swords and slicing through an oncoming gang of men, also wielding katanas, as a big red moon hovers over the scene.

Apart from ‘The Ghost’, Sonal Chauhan will also be seen in magnum opus Adipurush.