After impressing one and all with his hard-hitting films like, ‘Mulk’ and ‘Article 15’, filmmaker Anubhav Sinha is all set with his next titled, ‘Thappad’, starring Taapsee Pannu. Now, after unveiling the still from Thappad, Taapsee has shared the first poster of the film. 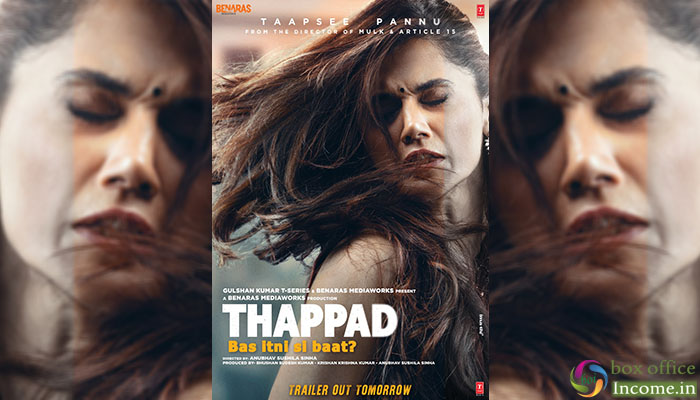 The actress took to her social media and shared, “Kya yeh bas itni si baat hai? Kya pyaar mein ye bhi jayaz hai? Yeh #Thappad Ki pehli Jhalak hai! #Thappadfirstlook”. The makers of the movie will release the trailer on the 31st of January and made sure they gave us a thought-provoking context with – “Thappad: Bas itni si baat?” line on the poster.

In the poster, Taapsee’s face appears to be distorted with her hair going astray, as if she’s been hit with great force – presumably a thappad. Taapsee’s poster has received thumbs-ups from her fans on Twitter and Instagram, with comments saying: “Looking forward.”

Although not much has been disclosed about the Anubhav Sinha directorial but fans can expect a high on the content quality driven film. Apart from Taapsee, the movie features Ratna Pathak Shah, Manav Kaul, Dia Mirza, Tanve Azmi, Ram Kapoor and others.

On the work front, she will also be seen in ‘Shabaash Mithu‘ where she will be seen playing the role of India’s Women Cricket team captain Mithali Raj. Thappad is co-produced by Bhushan Kumar, Krishan Kumar and Anubhav Sinha, who also directs the film. Thappad is slated to hit screens on February 28.