Not a day goes by without our lives being elated through the charm and charisma of heartthrob of the nation, Kartik Aaryan. Keeping his fans and followers his priority Kartik always finds a way to connect to them through his social media. 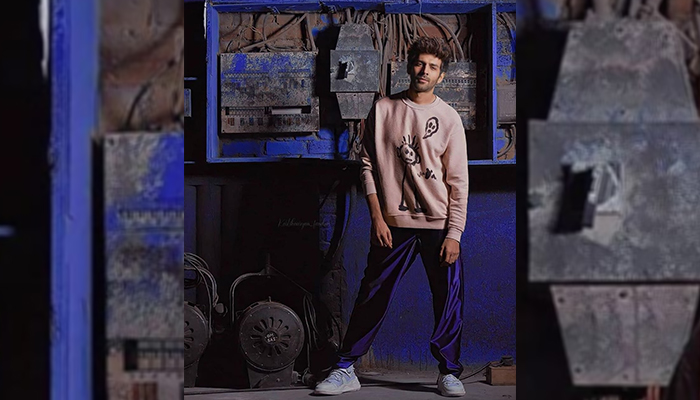 Being one of the busiest actor amongst the young lot with back to back shooting schedules, endorsement commitments and films lined up for releases, Kartik Aaryan still makes sure that he makes time to post his packet of entertainment for us almost everyday.

Taking to his Instagram, Kartik posted a picture of himself in zesty casual looks. Posing against a paperboard background Kartik looked super cute in a pastel pink sweatshirt and royal blue lowers paired with white sneakers. Captioning the same, he wrote, “High Voltage⚡ Touch at your own risk”.

We couldn’t agree more with his caption. The actor’s hot looks and the way he poses for the camera with that sass, is surely high voltage that soars the temperatures on our feed. Infact staring at his hot clicks for a long time is dangerous to health as it can make your heartbeats skip repetitively. Boy!

Juggling between work, Kartik is gearing up for his much anticipated release, that will see him playing an intense character, in ‘Dhamaka’. Meanwhile he is also busy wrapping the shoots of Bhool Bhulaiyaa 2 in the city, post which he will join the cast and crew of Dostana 2 to complete the shoot.