The makers of Sooryavanshi have released the teaser of the film’s first song Aila Re Aillaa. The song features the film’s lead actor Akshay Kumar, along with Ajay Devgn and Ranveer Singh, who will be seen in special appearances in the film. 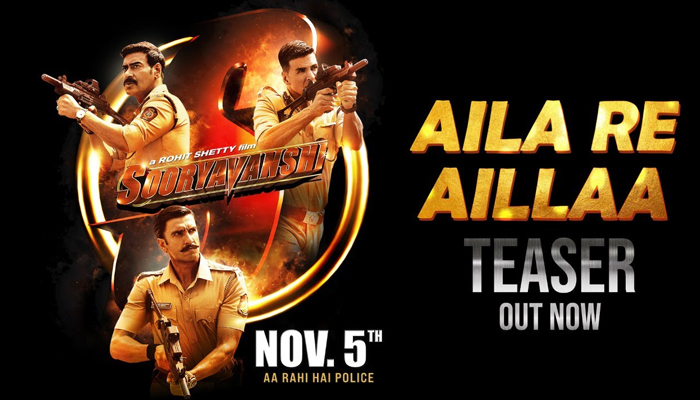 This track “Aila Re Aillaa” is sung by Daler Mehndi and the Music Recreated by Tanishk Bagchi and the new lyrics are penned by Shabbir Ahmed. The song originally is composed by Pritam and penned by Nitin Raikwar. Sooryavanshi will release on November 5.

Sharing Aila Re Aillaa’s teaser, Akshay wrote, “This Diwali come #BackToCinemas with #Sooryavanshi releasing on 5th November. Here’s a teaser of the celebration in store (sic).” The song will be released tomorrow (October 21).

Ajay Devgn and Ranveer Singh also shared the song’s teaser on Instagram. Ajay wrote, “Its a celebration when Singham, Simmba and Sooryavanshi come together! Here is the teaser of Aila Re Aillaa, song out tomorrow. Sooryvanshi is all set to release on 5th November. #Sooryavanshi #BackToCinemas (sic).”

Sooryavanshi is the fourth film in Rohit Shetty’s cop universe that kick-started with Ajay Devgn’s Singham in 2011. After Singham and Singham Returns, Ranveer Singh starred in Simmba. In Sooryavanshi, Katrina Kaif will play the lead role alongside Akshay.