The film-maker last week unveiled the teaser of his upcoming film Kalank in association with Dharma Productions and Fox Star Studios. He shares about his upcoming films and slate of 2019 amongst which will be Super 30, Chhichhore and Housefull 4.

Riding on the success of recent films like Judwaa 2 and Baaghi 2, filmmaker Sajid Nadiadwala and his production company Nadiadwala Grandson Entertainment (NGE) are gearing up for the next round of showbiz challenge in 2019-20. He has successful partnerships with stars like Salman Khan, Akshay Kumar, Hrithik Roshan, Varun Dhawan, Tiger Shroff and Sushant Singh Rajput.

Not just that, he’s also going to launch Suniel Shetty’s son Ahan in a Bollywood film, too. Sajid feels it’s his company’s ability to deliver cutting-edge content that holds him in good stead. He explains, “All my associates have worked with me more than once, which is the barometer to NGE’s success. Maybe it’s because of our focus and ability to curate content, which ends up taking all those who work with us, to their next level.”

Sajid started his year with Kalank by Karan’s side and they both have all praises and only warm wishes for the magnificent movie and its teaser. When asked about his first venture of the year he said, “It was Yash Ji’s dream which became Karan Johar’s passion and along with them I got this opportunity to support their vision. That’s our kickstart for the year.”

The filmmaker also feels that his films have set new benchmarks for success at the box office. He says, “The basic instinct of the creative team at NGE has been instrumental in creating successful box office stories for our films. I feel that there is nothing like a finishing line in films, every time you feel that you’re on a finishing line, it turns out to be a new starting line. You run and charge ahead only to find yourself starting all over again.”

In the near future, Sajid will present a slate of franchise films like Housefull 4, Baaghi 3, Kick 2 and Dishoom 2. Not just that, he is also looking forward to collaborations with acclaimed directors, too.

He reveals, “We have some great stories in the pipeline this year, which are directed by Nitesh Tiwari, Abhishek Varman, Farhad Samji and to up the entertainment we have Kabir Khan, Milan Luthria, Ahmed Khan & Saket Chaudhary” Sajid had last directed Salman’s Kick (2014) and he’s up for the challenge again. “I have started writing the much-awaited sequel to Kick,” he signs off. 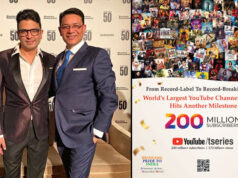