With over 28 years in the industry, the stunning royal prince of Pataudi has not only proved to be successful as an actor on screen but as a producer. From his debut in 1993, the versatile actor has only engaged the audience in awe with his ambidexterity. 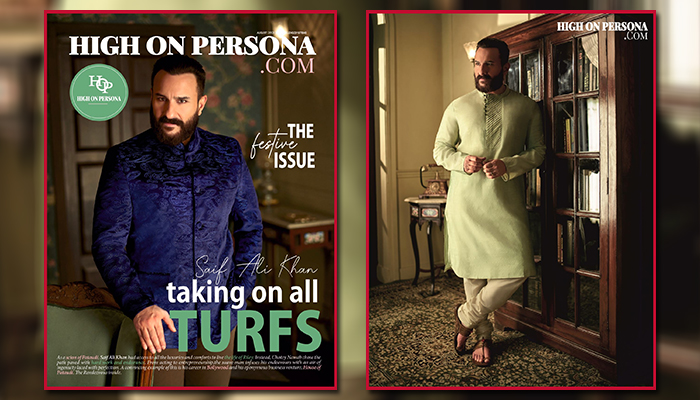 Be it in his iconic role as Sameer in ‘Dil Chahta Hai’ as a goofball or an Indo-Russian zombie slayer as Boris in ‘Go Goa gone’, Sail has given us significant hits like- Cocktail, Race, Hum Apke Hai Kaun, Omkara, Parineeta, Kaal Ho Na Ho, Sacred Games etc.

Saif is also a fashion icon, a talented guitarist and a successful entrepreneur with his brand, House of Pataudi. This month the multi-faceted personality Saif Ali Khan, is gracing the cover of High On Persona Magazine.

It is their festive issue. The headline reads, “Saif Ali Khan, taking on all turfs”. He is seen wearing a dark blue bandhgala on the cover of High On Persona Magazine.

His upcoming movie ‘Bhoot Police’ with Arjun Kapoor, Jacqueline Fernandes and Yami Gautam is a horror-comedy that will be releasing on September 17, 2021.