Mass Maharaja of Tollywood (Telugu Cinema) Ravi Teja is basking the success of 2020 released Krack despite the coronavirus pandemic. The actor is now all set to tie hands with director Sarath Mandava for a new untitled film, which is tentatively being referred to as #RT68. 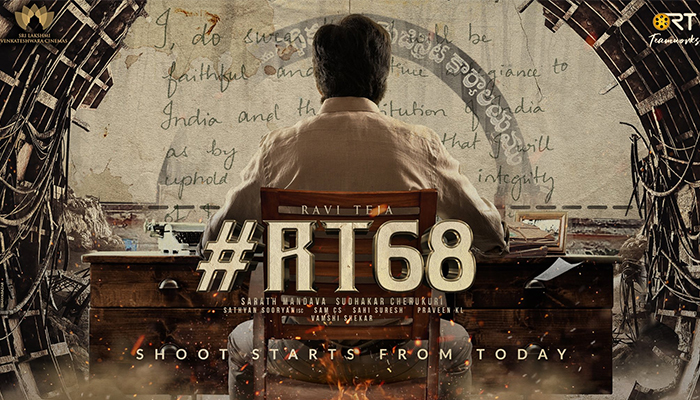 Sharing the pre look on social media, the makers wrote, “Mass Maharaja and crew taking charge from today for the Blockbuster Project Sign of the horns #RT68 shoot Begins Movie camera. Futher updates very soon!. ” The shoot of the film will begin today in Hyderabad.

The poster looks captivating as Ravi can be seen sitting on a chair and the board says that it’s at an executive magistrate office. The fire indicates the intensity of Ravi’s character. The poster also sees an old letter of someone swearing in as a government official.

On the desk, we can spot a typewriter, files and other office staples. It also has several other elements which might have a connection with the film’s storyline. Billed to be a unique thriller with a story inspired by true incidents, Ravi plays a never-seen-before role in the movie, and going by the poster, he sports an entirely different look.

Divyansha Koushik of Majili fame is the leading lady of the film. RT68 also features Nasser, Sr Naresh, Pavitra Lokesh, Rahul Rama Krishna, Eerojullo Sree, Madhu Sudan Rao, Surekha Vani and others in pivotal roles. The film is bankrolled by Sudhakar Cherukuri under SLV Cinemas LLP banner. Music for the yet to be titled flick is by Sam CS, while Sathyan Sooryan ISC cranks the camera. Praveen KL is the editor.