After impressing us with the chemistry in 2017 hit film, ‘Bareilly Ki Barfi’, Rajkummar Rao and Kriti Sanon are all set to come together to entertain us with yet another film in Dinesh Vijan’s yet-untitled comedy. The film also features Paresh Rawal and Dimple Kapadia in pivotal roles. 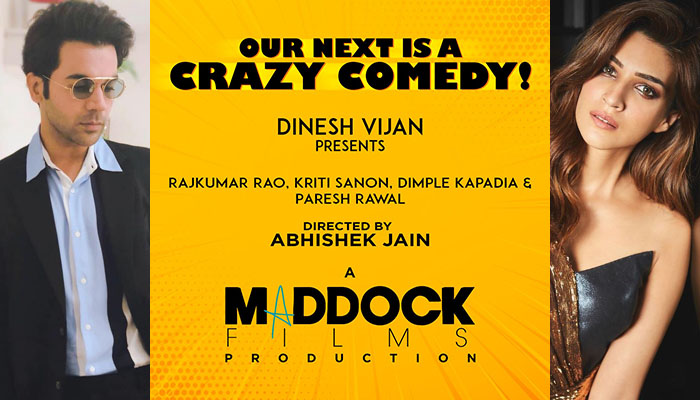 The film will be produced by Dinesh Vijan’s Maddock Films and the production house took to their Twitter page to announce the news. This comedy film will be helmed by Abhishek Jain. Maddock films tweeted, “#DineshVijan’s next crazy comedy is directed by @cinemanabhishek and goes on floors March 2020. @RajkummarRao @kritisanon #DimpleKapadia #PareshRawal.”

Speaking about the movie, In the interview with a leading daily, producer Dinesh opened up about the film and said, “This innovative idea came from real life though it is not inspired by any incident in particular. We have spun it into a crazy comedy with our unique tadka.”

Meanwhile, currently, Rajkummar Rao is all geared up for his upcoming film ‘Chhalaang‘. Directed by Hansal Mehta, the film also stars Nushrat Bharucha in the lead role. Chhalaang will hit the screens on June 12, 2020. The trailer of the film is expected to be out soon.

On the other hand, Kriti is currently busy with the shooting of the film Mimi. It is being helmed by Laxman Utekar and also stars Pankaj Tripathi in the lead role. Mimi is an official remake of 2011 National Award-winning 2011 Marathi film, Mala Aai Vhhaychy!