The lyrical video of the ‘RA RA Rakkamma’ song from Kichcha Sudeepa’s 3D action Thriller ‘Vikrant Rona’ has already made the nation grove on its beats. Now the makers are all set to make the audience go crazy with the video teaser of the song. 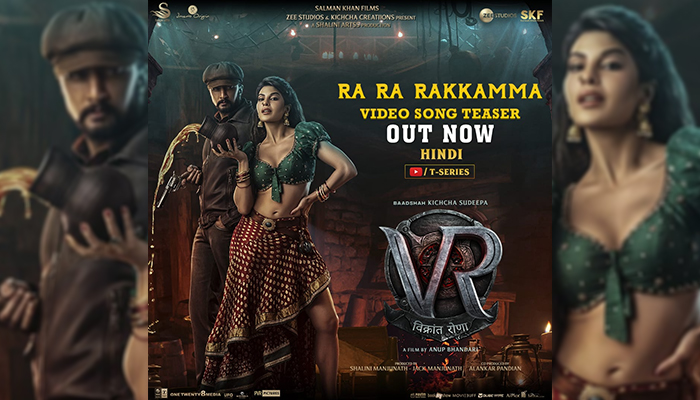 Having the stunning beauty Jacqueline Fernandez on its poster along with the handsome hunk Kichcha Sudeepa has already ignited the anticipation for the audience to expect a hardcore dance number on its way with the song.

The video teaser of the song has come as a treat for the audience to have some trendsetter signature steps that will surely set your mood at the party arena. The song is sung by Sunidhi Chauhan and Nakash Aziz with the lyrics of Shabbir.

Moreover, the makers have recently released, The Devil’s Fury video of Gumma Banda Gumma theme song from the movie that has given the audience a brief lookout into the mysterious world of Vikrant Rona. And after watching the video teaser of the ‘RA RA Rakkamma’ song, the audience is eagerly waiting to see the film hit the theaters.

‘Vikrant Rona’ will release worldwide in 3D on July 28th, starring Kichcha Sudeepa, directed by Anup Bhandari, also starring Jacqueline Fernandez, Nirup Bhandari, and Neetha Ashok is presented by Salman Khan Films, Zee Studios, and Kichcha Creatiions in North India produced by Jack Manjunath under his production Shalini Artss, and co-produced by Alankar Pandian of Invenio Origins the film. The film will be distributed in North India by PVR Pictures.