Despite the release of highly-buzzed Jumanji 2 & Hindi cop drama Mardaani 2 which are running strongly across the country, already existing comedy films Pati Patni Aur Woh and Panipat have remained almost unaffected at the box office and registered a good business over the weekend. 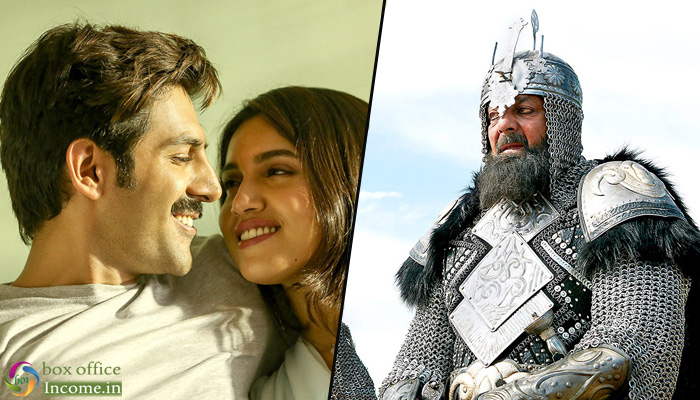 Starring Kartik Aaryan, Bhumi Pednekar and Ananya Panday, Pati Patni Aur Woh got succeed to entertain the viewers and also received positive reviews from the critics. In the first week, it remained strong throughout and did the business of 55.97 crores which included 35.94 crores in the weekend and 20.03 crores on weekdays.

Now it is running in the second week and once again passed the weekend on a good note. On 2nd Friday, Pati Patni Aur Woh did the business of 3.05 crores. With a fair jump, it minted 4.88 crores on 2nd Saturday & 5.52 crores on 2nd Sunday. After 10 days, its total domestic collection has become 69.42 crores nett.

On the other hand, Arjun Kapoor, Sanjay Dutt and Kriti Sanon starrer Panipat has gathered mixed reviews from critics as well as audience. In the opening week, it did the business of 25.68 crores with 17.68 crores in the weekend and 8 crores on weekdays.

Ashutosh Gowaikar’s directorial is now running in the second week with a decent pace and had started the weekend at a decent note by collecting 0.69 crore on 2nd Friday. With a fair jump in footfalls, it managed to rake 1.26 crore on 2nd Saturday & 1.48 crores on 2nd Sunday. After 10 days, the total collection of Panipat has become 29.11 crores nett.