Hopping from one schedule to another, Raashii Khanna has been working round the clock for her upcoming projects. With Mother’s Day ahead, Raashii landed back to her home city, and surprised her mother by fulfilling one of her dreams. She gifted her mother with a luxury gift for the occasion of Mother’s Day. Raashii bought a premium BMW 740li for her mother. 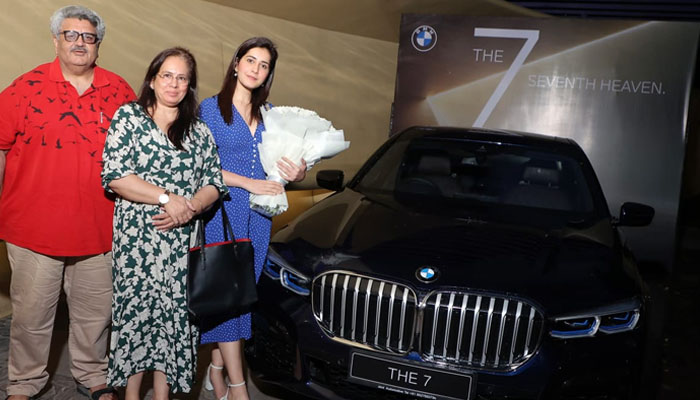 The actress was elated to surprise her mother with the gift. Fulfilling her mother’s long time wish of owning a luxury car, Raashii gifted her BMW 740li, which is one of the most premium car with top luxury facilities of the. BMW 7 series. She opted for the classic blue mettalic one, supposing it to be her mother’s favorite colour which has coordinated interiors in dark brown colour making the automobile look more attractive.

The actress brought the four wheeler beauty home with immense pride and happiness. Raashii Khanna along with her parents posed with the car as they celebrated buying it. It being a surprise gift for her mother, it clearly looked like an emotional moment.

With this high on emotions mother’s day eve celebration, nothing but just proud reflected in her parent’s eyes as it can be seen in the picture.

The actress is all set for her Bollywood debut with Dharma Production’s Yodha. She is simultaneously also shooting for her regional projects and has also started preparing for her OTT debut with Shahid Kapoor, Farzi on Amazon Prime. With so many interesting line ups one after the other, fans just can’t keep calm for her films to hit the screens.