One of the most awaited songs of 2022 surely includes Bhushan Kumar’s Mast Nazron Se sung by none other than the effervescent, Jubin Nautiyal! The song has just dropped on YouTube and is already raking up the views all thanks to its peppy tune and of course, Jubin’s soulful voice. What’s more? T-Series launched the song earlier today with much ‘Taam Jhaam’. 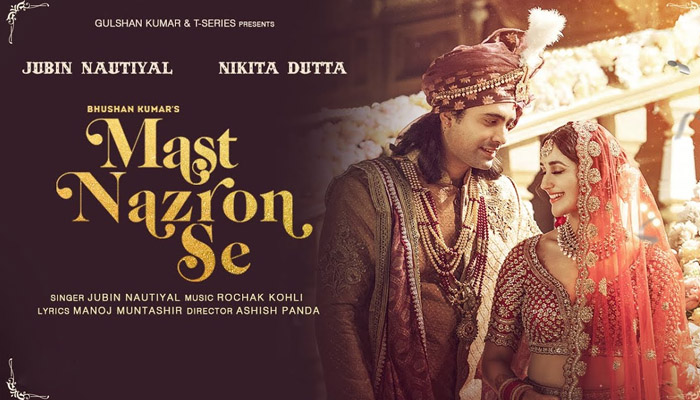 The song which is picturised against the beautiful backdrop of a traditional Indian wedding features Jubin and Nikita’s celebrations along with the vibrant and talented Himansh Kohli and Anushka Sen. In keeping with the theme of the song, T-Series hosted a song launch event which featured a wedding reception setup and surely set the mood for the day in addition to a dress code for the attendees to wear ‘Smart Indian Wear’!

The song was launched with much fan fare and the audience hooted for an encore when the song was screened for them. Infact, when Jubin and Nikita were called on stage, the audience could feel their palatable chemistry and went on to cheer for the duo. Producer, Bhushan Kumar too went on to tease Jubin and Nikita along with the audience present at the event which had everyone is splits. With a media turnout like no other, Mast Nazron Se’s event was certainly one of the grandest song launches the audience and industry has ever seen, with a lavish wedding backdrop and a crowd who were cheering and applauding their favourite stars and the beautiful song they launched.

Present at the event were, Bhushan Kumar, Jubin Nautiyal, Nikita Dutta, Himansh Kohli and Anushka Sen in addition to Rochak and Manoj Muntashir. Aditya Dev, the DOP Sunil Patel & choreographer Debo Suresh Nair too were seen at the grand song launch. Singer Jubin was seen crooning to the tune for the audience present which had them all singing to his tunes in no time and comes as no surprise!

Composer Rochak Kohli brings to you a delightful new flavour with traditional Indian beats in Mast Nazron Se and with Jubin Nautiyal’s evergreen voice, the song is sure to be the wedding anthem of the year!