With the changing times owing to the pandemic, our daily routines and rituals have also witnessed changes. As Maniesh Paul visited the politician and former actress Smriti Irani’s house recently, the actor and host expressed gratitude for her hospitality and pointed out that Kaadha has replaced the traditional welcoming beverage -Tea. 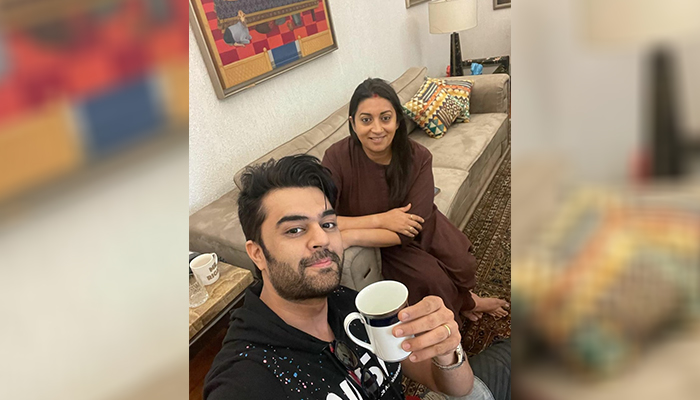 Taking to his social media, Maniesh Paul shared pictures of the interaction with Smriti Irani, “Thanks for a cup of lovely KAADHA @smritiiraniofficial ma’am….kya time aa gaya hai…chai ki jagah sab KAADHA peeney lage hain!!but thanks for having me over and being warm as always🤗🙏🏻 P.S: mask was taken off just for the pic…love you all Spread love😊 #mp #teatime #lovelymorning #smritiiranimam #warmth”.

One of the most popular television celebrities, Maniesh Paul visited the nation’s beloved ‘Tulsi’ who is currently the member of Union Cabinet as the Minister of Textiles and Minister of Women and Child Development.

Aptly representing the contemporary situations with his humourous touch regularly, Maniesh Paul uses his social media to entertain the netizens with his engaging posts. The actor and host also recently launched a podcast, presenting heartfelt conversations with people from different walks of life, unfolding the varied facades of the pandemic. Maniesh also penned two heartwarming poems, depicting the emotions engulfing the nation with Covid-19’s second wave.

Looking forward to his upcoming film Jug Jugg Jeeyo produced by Karan Johar under the banner of Dharma Productions, Maniesh Paul has an interesting line up of projects.