Ever Since the trailer of Adivi Sesh’s big bollywood debut dropped, the audiences have been waiting to see the gripping narrative unfold on screen. Whilst the trailer promised us that its Adivi’s fiercest character so far in terms of look, feel and emotion, it also instilled a sense of pride in every Indian. 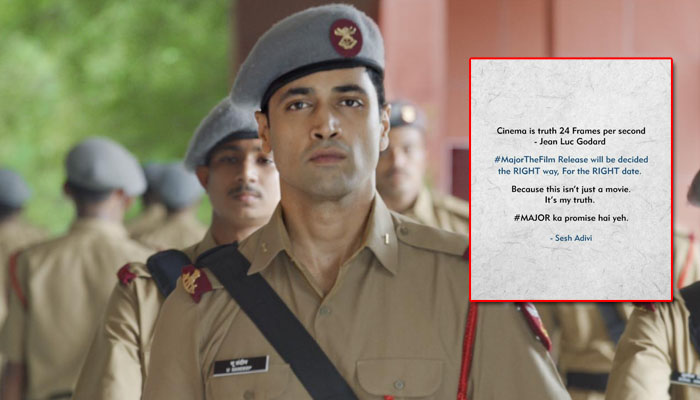 Major is based on the life and journey of Sandeep Unnikrishnan who was martyred in the deadly terror attacks of 26-11 in Mumbai, India. Adivi not only looks the part of Major but emotes in a way that moves you from within. His hard work, ambition, grit and talent is all visible from the trailer itself.

Whilst the third wave of COVID 19 caused yet another damper in terms cinema releases, the silver lining is that now India is in a green zone with malls, restaurants and theatres opening up. Along with this, starts a frenzy of release dates with everyone wanting the best. However, Sesh has always been clear that Major should get the release it truly deserves, as a mark of respect to all the lives lost in the attacks.

Adivi stated that, “Cinema is truth 24 Frames per second – Jean Luc Godard #MajorTheFilm Release will be decided the RIGHT way. For the RIGHT date. Because this isn’t just a movie. It’s my truth. #MAJOR ka promise hai yeh.”

Now, one just has to waited with baited breath for the release date of #Major! Stay Tuned for a Major announcement