While Adivi Sesh is overwhelmed with the humbling words coming his way for his performance in ‘Major’, the most special words that came the star’s way were those from Major Sandeep’s parents who watched the film in Bangalore with Adivi. 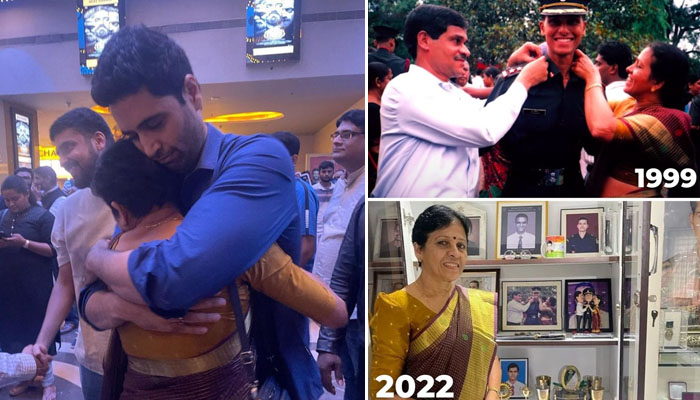 In a touching gesture, the Major’s mother Dhanalakshmi Unnikrishnan also wore the same saree she wore 23 years ago during her son’s pipping ceremony to the screening as well as the watch he gifted her. It was an emotional and surreal moment for Adivi to relive these special moments with the late Major’s family, as they watched a tribute to him on the big screen.

Narrating this emotional moment, Adivi Sesh says, “Two days before the release, we did the premier in Bangalore. Amma (the late Sandeep Unnikrishnan’s mother) called me and said 23 years ago I wore this saree for Major Sandeep’s graduation; today I’m wearing this saree for you. She showed me the watch he gave her and she came to watch the film.’

“I kid you not, the moment I saw her I hugged her for 4 minutes and I held their hands while watching the film. It was a surreal feeling, parents watching a film inspired by their son who is no longer there – After the film they gave me a kiss, I held their hands and sat on the floor and in that moment I knew we won,” he concluded.

Adivi Sesh has been flooded with rave reviews for his sensitive and moving portrayal of the late Major Sandeep Unnikrishnan, who will forever go down in our memories for his bravery and sacrifice in the 26/11 Mumbai terror attacks.