A baarat is not complete without the groom coming in on a ghodi. But quirky as ever, Zahrah S Khan plays a new age bride in her upcoming music video ‘Main Tenu Chadh Jaungi’ where she is the one who climbs the ghodi. Now isn’t that something exciting!? 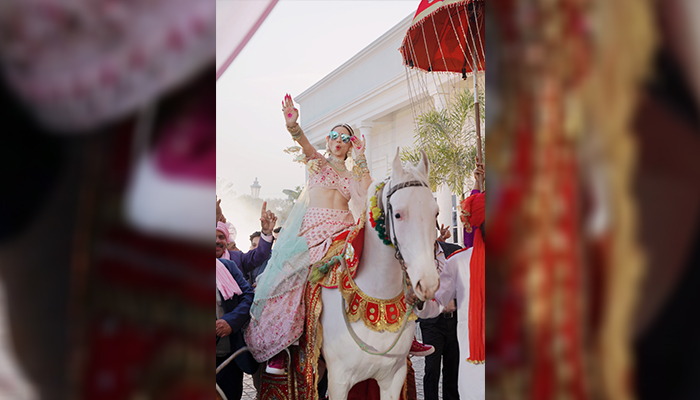 Zahrah was full of enthusiasm as it was her first time climbing a horse in bridal avatar while wearing a beautiful yet heavy wedding lehnga. She says, “Be it movies or the weddings I attended, I always saw the groom making a grand entrance on a ghodi. I personally enjoy horse riding a lot and would never miss a chance to experience it again and again. I also love horses and ‘Main Tenu Chadh Jaungi’ being a wedding song, I just could not let go of the opportunity which led me to propose this idea of making an entry on ghodi and everyone was on board.”

She also added that, even though she was a little nervous climbing on the horse with a heavy lehnga, it was overall a fun experience during the shoot. She even shared that it was a real challenge getting on and off the horse with the lehenga and she even got stuck midway while shooting the scene.

Through the song, ‘Main Tenu Chadh Jaungi’ Zahrah aims to give the message to the brides all over the world to express themselves to the fullest no matter what. The song which was recently announced through a quirky wedding invitation, is set to release on 29th October and is sung by Zahrah S Khan featuring the singer herself alongside Shaheer Sheikh and is directed by Navjit Buttar.

Zahrah S Khan’s Main Tenu Chadh Jaungi is produced by T-Series. Directed by Navjit Buttar and starring Zahrah and Shaheer Sheikh, the song will be out on 29th October on T-Series’ YouTube channel.