Kriti Sanon who recently mesmerized her fans and the audience with her outstanding performance in ‘Mimi’ is filming for her upcoming flick ‘Bachchan Pandey’ in full swing. 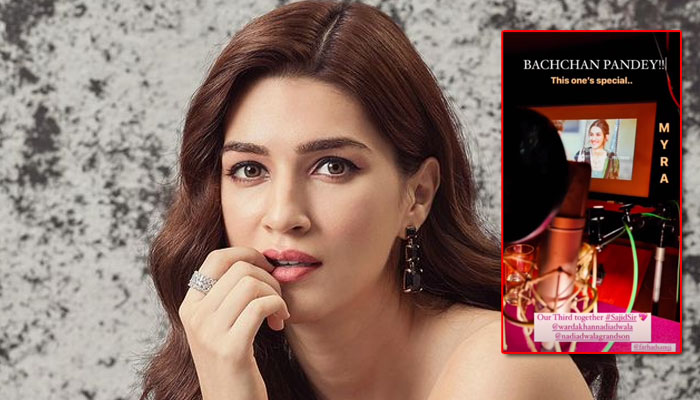 While on one hand, the actress is prepping for her action thriller ‘Ganapath’ opposite Tiger Shroff, on the other, she has now started dubbing for her next action comedy film ‘Bachchan Pandey’ as well.

Kriti took to her Instagram story and shared a glimpse of her character ‘Myra’ from Bachchan Pandey. She captioned the post, “Bachchan Pandey!!! this one’s special !!! Our third together #SajidSir @wardakhannadiadwala @nadiadwalagrandson @farhadsamji.

Bachchan Pandey, which stars Akshay Kumar in the lead, is being helmed by Farhad Samji and produced by Sajid Nadiadwala. Apart from Akshay and Kriti, the film also feature Jacqueline Fernandez and Arshad Warsi in pivotal roles.

Akshay’s character in the film is a gangster who aspires to be an actor, while Kriti essays the role of a journalist, who harbours dreams of becoming a film director. The film is slated for theatrical release on Januray 26th, 2022.