Rocking star Yash as ‘Rocky Bhai’ is a wonder in itself and is one of the most loved characters by the audience. His persona as a macho deadly hero, in KGF chapter 1 has created unmatchable anticipation for its chapter 2 which is about to hit the theaters soon. From the makers to the distributers, everyone has ensured to enter the theaters with a blast. 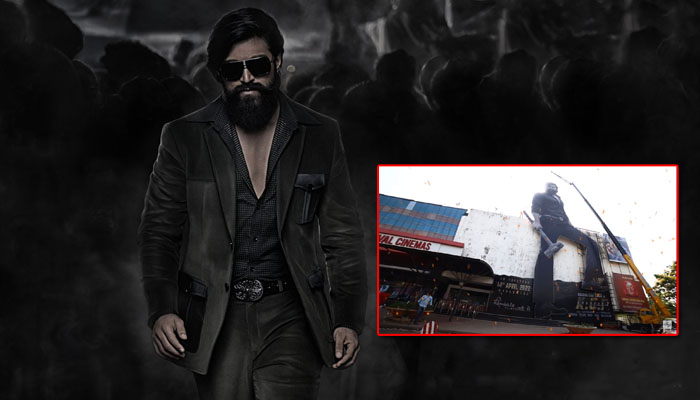 As soon as the trailer of ‘KGF 2’ is released, the anticipation of the audience has just got a fire to experience the thrill in the theaters. The rustless and dashing ‘Rocky Bhai’ is finally coming back with more action and thrill. Rocking star Yash has spread the charm of his personality in the character of ‘Rocky Bhai’ which has become one of the most important factors for the audience to watch out for in the movie.

The sensation of his popularity is creating examples everywhere just like the one which was just witnessed when a 100 feet cut out of ‘Rocky Bhai’ was pasted outside a theater in Mumbai. The cut-out shines out bright in the night just like the movie is about to shine at the box office. It seems like the makers have bought the larger-than-life world of the film out, for its audience. It is again going to accelerate the ever-rising madness of the audience for the film.

Releasing nationwide on April 14, 2022, in Kannada, Telugu, Hindi, Tamil and Malayalam, K.G.F.: Chapter 2 is written and directed by Prashanth Neel, one of the most sought-after directors, and produced by Vijay Kiragandur, under the Hombale Films banner. One of the emerging pan-India production houses, Hombale Films is set to showcase some of the biggest films in Indian cinema over the next two years, including the much-awaited film ‘Salaar’ starring Prabhas.

The film is being presented in North-Indian markets by Ritesh Sidhwani and Farhan Akhtar’s Excel Entertainment and AA Films. Excel has given super hits like Dil Chahata Hai, Zindagi Na Milegi Dobara, Dil Dhadakne Do, and Gully Boy to only name a few.