Trust the witty young superstar Kartik Aaryan to make the most relatable and engaging posts on social media. Kartik Aaryan often shares sunkissed selfies from home but today he took his hot-selfie game to another level as he shared some pictures from the gym with a quirky twist. The heartthrob of the nation offered a hilarious take on his pictures by thanking his trainer for the photoshoot rather than the workout. 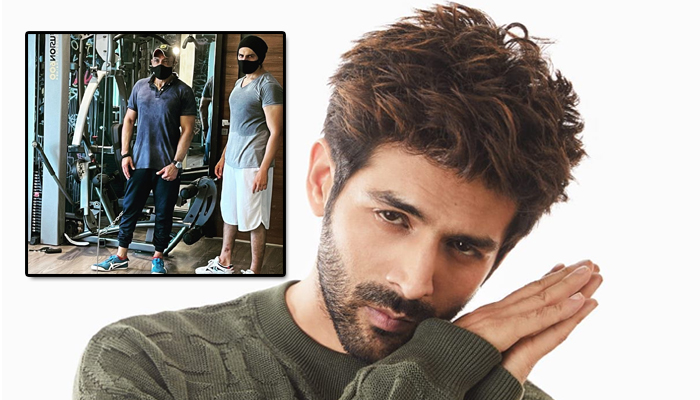 Bulking up and flaunting his toned body, Kartik Aaryan has been hitting the gym regularly generating anticipation about his upcoming projects, leaving fans wondering if he’s training for a film. Earlier too, Kartik had shared glimpses into his vigorous training sessions showcasing his beefed up built.

Posting pictures with his trainer, Kartik Aaryan said, “Had a great photoshoot 😬 With the beast @samir_jaura 🔥🔥#SundayFitday #Workinprogress ❤️‍🔥”. Touted as the social media king, Kartik Aaryan is known for his quirky, funny and intriguing captions which strike a conversation with his fans instantly, resulting in an abundance of comments. Garnering praises for his sexy gym avatar, Kartik Aaryan has been flooded with love and appreciation, leaving his fans weak in their knees. Right from Varun Dhawan, Farah Khan to his Titu aka Sunny Singh got talking about his beefy avatar. The actor surely surprised everyone with his sexy avatar.

Working hard to portray diverse characters through varied genres in projects, the versatile Kartik Aaryan is one of the busiest and most bankable actors in the industry with multiple big budget projects in his pipeline. Leaving no stones unturned to ace his characters, Kartik is often seen pushing his boundaries, venturing into unexplored terrains with his projects.

Gearing up for the release of his debut thriller Dhamaka, Kartik Aaryan would also be seen foraying into horror comedy for the first time with Bhool Bhulaiyaa 2. Having announced his grand musical love story with Sajid Nadiadwala and Sameer Vidwans, Kartik Aaryan has piqued the interests of the audience for his upcoming projects.