After an exceptional opening weekend, newly released romantic entertainer Kabir Singh has passed the crucial Monday test on a solid note. Despite a normal wording day, the movie remained strong across the country and surpassed the total collection of Multi-starrer Kalank (80.35 crores). 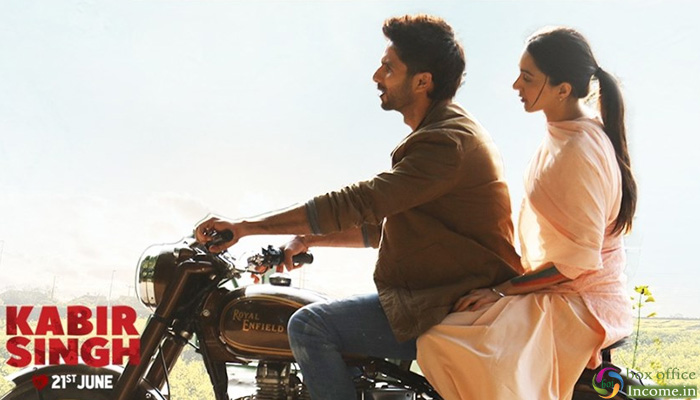 Directed by Sandeep Vanga Reddy, Kabir Singh is the official adaptation of Telugu smash hit Arjun Reddy starring Shahid Kapoor and Kiara Advani in lead role. The movie was released with huge buzz among fans and as expected got succeed to impress all the viewers with its intense and the story-line.

Because of high initial buzz, Cine1 Studio and T-Series’ production took a terrific start across India in morning and picked strongly well post noon shows. With a similar response at single as well as multi-screen cinemas, the movie registered a massive opening business of 20.21 crores on Friday.

On the next day i.e. Saturday due to positive word of mouth, Kabir Singh remained super-strong and did the business of 22.71 crores. Then on Sunday, with a further solid jump, it minted the amount of 27.91 crores and raised its opening weekend total collection to 70.83 crores from 3123 screens.

Now Shahid-Kiara starrer has stepped-in on weekdays and still has a superb hold over the audience nationwide. On Monday despite a normal working day, Kabir Singh showed terrific performance and bagged the amount of 17.54 crores. With this, the total collection of the movie after 4 days, has become 88.37 crores at the domestic box office.