The Indian filmmaker, Atlee enjoys a huge fan base who always look forward to his work. The director along with his wife Priya made a special announcement that has left their fans in absolute bliss. 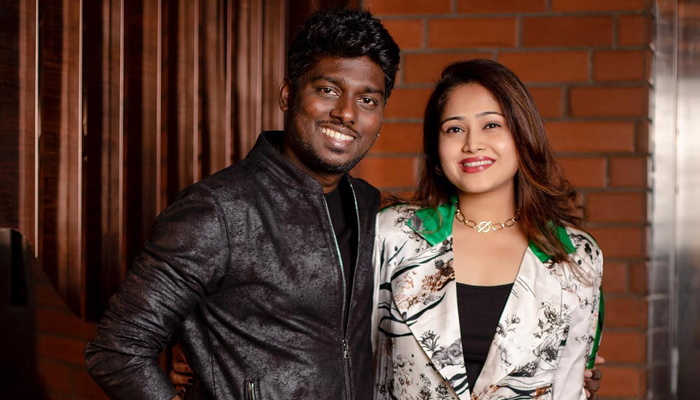 Taking to her social media, Atlee’s wife Krishna Priya announced her pregnancy with some adorable pictures of her with Atlee. The note that she wrote read, “Happy to announce that we are pregnant need all your blessing and love ❤️❤️Wit love Atlee & Priya”

The couple who has been married for 8 years also released a statement to share this happiness with the world. The statement reads, “We are grateful for all the love and support you have showered upon us over the years, we would like you to continue showing your love to our little one as well.

Eagerly waiting to embark on this exciting adventure of bringing our little bundle of happiness into this world with all your blessings” says the power couple of Indian Cinema.”

Atlee is an Indian Filmmaker who changed the face of south Indian commercial cinema and shifted gears to become the most successful director of this era. He broke barriers to become India’s biggest filmmaker with Bigil, being the highest-grossing Tamil film of 2019. Atlee’s first Bollywood project which is going to be one of the biggest films of Indian cinema is set to release next year starring Bollywood Badshah and Indian superstar Shahrukh Khan.

In 2014, Atlee married actress Priya after years of love. They aspired together to start a production house “A for Apple Production” and successfully produced two films under their banner.

Being married for 8 years now, Atlee & Priya are about to move onto a newer experience in their lives. With tears of joy and a lot of mixed emotions, Atlee and Priya announce their pregnancy.