The trailer of Rajkummar Rao and Kriti Sanon starrer film ‘ Hum Do, Hamare Do ‘ has been released. The film also stars veteran stars Ratna Pathak Shah and Paresh Rawal. 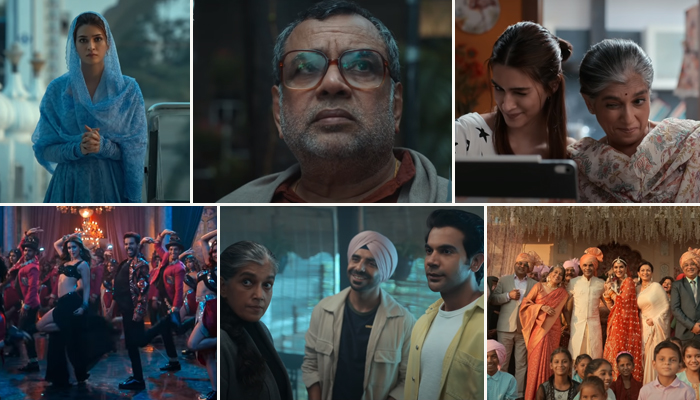 According to the film’s trailer Rajkummar and Kriti are in love and want to get married. So what’s the problem? Rajkummar has no family and Kriti’s only condition is to go to a household that’s complete with elders and a pet dog. In the quest, Rajkummar, along with his friend Aparshakti Khurana, go out to ‘hire’ parents. Turns out, the adopted mother-father (Paresh Rawal and Ratna Pathak Shah) have a personal history.

Paresh is already smitten by Ratna and his performance is only real love for her. In fact, to get rid of Paresh’s lover-boy shenanigans, Ratna even plans his fake ‘death’ atop a mountain. But Paresh Rawal is undeterred. He is out proposing to Ratna to be his actual wife.

Hilarious chaos and crackling chemistry of the twosome is the trailer’s highlight. From confusions about how the parents first met to why they have different surnames, the trailer of Hum Do Hamare Do hints at a laugh riot.

Speaking about the movie, Dinesh Vijan said, “With Hum Do Humare Do, we take the essence of family further, because in the end, a family is a set of people we love and cherish. Our film is a wholesome comedy that can be enjoyed by all three generations.”

Produced by Dinesh Vijan’s Maddock Films, the movie is directed by Abhishek Jain. Hum Do Hamare Do also stars Manu Rishi Chadha and Prachee Shah Paandya, and will have its premiere on Disney Plus Hotstar on October 29.