After the blockbuster success of the title track of Surroor 2021 garnered 38 million views and 2 million streams in merely a few days, Himesh Reshammiya releases the teaser poster of his 2nd song which will release in July! The question remains on the name of the song and the actress opposite Himesh, and the fans are eagerly awaiting the announcement. 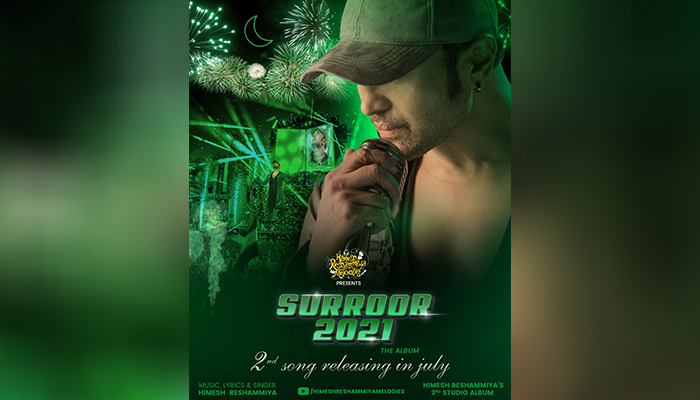 Sources from the sets confirm that the song has been shot on a grand scale in Rajasthan’s illustrious forts as well as Mumbai and the song is going to be a romantic heart-break. Himesh, the superhit machine is a maestro in the field of music and the second track from Surroor 2021 will be a tune that will have everyone humming instantly!

Incidentally, July 23rd marks Himesh’s birthday and on asking the rockstar if he will release it on the same day he says, “We will release the date of the song soon and I assure my fans that the song is going to be on an opulent scale! The video output is amazing and I would like to thank my fans and the audience for giving the Surroor 2021 title track so much love.”

“Thanks for giving so much love to the title track of surroor 2021 title track with 38 million views and 2 million streams in a few days , now this is the teaser poster of the 2 nd track which will be releasing in July , what’s the name of the track ? Wl let you know soon, it’s a beautiful romantic heart break melody for everyone in love , the video is grand and the post production and editing of the video is in progress , the story of the first video will be resolved in the last video and song of the album Surroor 2021 , the journey has just begun , you will love this song and video , give it all your love , will announce the cast of the video also next month with the songs name , love you alll jai Matadi Let’s rock ❤️❤️❤️#music #surroor2021 @himeshreshammiyamelodies,” said Himesh on his Instagram post.

The poster of the second song is out now and after the superhit response to the title track of Surroor 2021, we are all waiting with bated breath for more news from the bonafide superhit machine, Himesh Reshammiya!